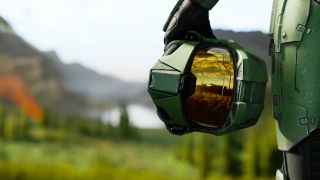 Halo Infinite will officially be the launch title for Xbox Project Scarlett's release in holiday 2020. And happily, Halo fans who aren’t making the upgrade to Microsoft's latest console will still be able to play the hotly anticipated sequel on Xbox One. If anyone had any fears that Project Scarlett’s predecessor will be getting a lesser version of Infinite, you’ll be glad to know Halo franchise director Frank O'Connor recently gave his reassurances that the “Xbox One is not going to be a second-class citizen.”

O’Connor spoke to YouTuber Blackmist523 at the Halo Outpost event in Orlando last month (via IGN) and explained that while Project Scarlett will be the “special citizen” of the game’s release, the Xbox One version will still “look incredible.”

“The Xbox One is not going to be a second-class citizen. We’re building it so it plays and looks fantastic on Xbox One,” O’Connor said, “and then everything else is plus-plus-plus, but we’ve got a few tricks up our sleeves that we’re thinking about.”

Halo Infinite is also set to launch on PC on the same date as the console release for the first time. O’Connor went on to say that the developers are always shooting for the best possible hardware target and the decision between playing on Scarlett or PC will depend on what rig you have when Master Chief returns.

Whether the Xbox One version will be limited in anyway is yet to be seen, but it's sounding like those who won't be taking the leap to Project Scarlett will still be able to experience Halo Infinite in all its glory.

Did you catch the Halo Infinite trailer? Well it turns out it was hiding a Cortana sound clip all along.