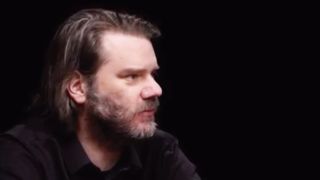 In August 2017, former Valve writer Marc Laidlaw shared - in his words - a ‘fanfic’ plot outline for Half-Life 3. Code-named Epistle 3, the story swapped a few names around (Gordon Freeman was replaced by a female character called Gertie Fremont), but to all intents and purposes this is the closest we’ve come to resolving the events of 2007’s Half-Life 2: Episode 2. With its cliffhanger ending, Valve have left fans guessing at Gordon Freeman’s fate for over 11 years. At the recent Develop conference in Brighton, we caught up with Marc’s former Valve colleague – and fellow Half-Life series writer - Chet Faliszek, creative director at Bossa Studios. Was Chet surprised that Marc would choose to go public with his vision for a Half-Life sequel? “I’ll let Marc speak for that”, says Chet. “I… I was surprised by it coming out”, he adds, “I’ll let Marc speak for that”.

I know only of Gertie Fremont, Elly Vaunt and her son Alex, Jerry Maas, and Wanda Bree. I don't know why fans are genderswapping my chars!August 25, 2017

Chet also wrote for Half-Life 2, Portal and Left 4 Dead. Had he ever felt the need to comment on how Half-Life might resolve? “No. I think one of the things when you’re working in a company [like Valve] is the realisation that there’s a whole bunch of people working on things, and sometimes people would falsely equate me [as a spokesman] since I was out doing press or something and that’s BS. There’s a whole bunch of people working on it, and it’s their group ownership of it that keeps it going. A million people with names you don’t know, that are more instrumental on that game that made it better, funnier, more interesting. At this point, I’m a fan, and waiting to see whats going to come out of it”.

Chet’s comments do little to confirm that Half-Life 3 (or indeed, any Half-Life sequel) will ever see the light of day, but don't misalign with rumors that a Half-Life sequel has been worked on at Valve over the last decade under different groups of developers. Fans have tracked a surprisingly elaborate ten-year history of Half Life 3 for a game that may never exist. Back in 2011, Chet had noted that Valve is ‘not prepared to talk about it [episode 3] right now’. In a 2017 Reddit AMA Valve owner Gabe Newell was asked if there was any chance of a new IP that takes place in the Half-Life / Portal universe. “Yep” was his simple reply.

In January 2017, Game Informer tried to investigate the status of Half-Life, claiming to speak to former Valve employees who suggested the company’s unusual development culture contributed to the sequel’s limbo. A recent Reddit thread about the difficulties of working in a ‘self-organizing company’ (believed to be barely disguised shorthand for Valve, given more credence by the 'desks on wheels' reference, a famous Valve motif) might shed some light on the challenges. “If you’re dealing with a self-organizing company it’s more complex. You will be triangulated against multiple people and you’ll have to deal with group consensus”, alludes one Reddit poster.

Chet was – unsurprisingly – diplomatic when we asked what internal hurdles might need to be overcome for Valve to finish Half-Life. “I’ll let them speak to that”, he said. Did Chet feel that there was a popular misconception about Valve that he wished fans understood? “Well, I guess I hate to talk about Valve, since they still exist and they can talk for themselves. I prefer not to make a projection there.”, he said. “Actually, my answer to that is: games are really easy to make, there’s a button on Unity, on Unreal, that you press and you finish your game. That’s it.”. Unless there genuinely is that button, which would be some secret to have kept all these years, it seems safe to infer that Half-Life is a more complex project than many believe.

For now, the wait for Half-Life 3 goes on, until Valve’s internal G-Men feel the need to reactivate one of the most-anticipated, but least likely, sequels in history.

Bossa Studios are working on an untitled AI-led co-op game based on emergent stories that you can read more about on GamesRadar+ soon.