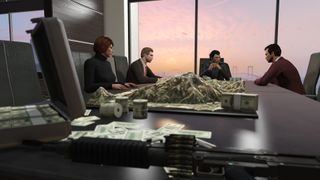 Rockstar North, the British developer renowned for creating the Grand Theft Auto series, may have just confirmed its working on the next series in its open world crime franchise, GTA 6, thanks to detail found in the company's recently published tax returns.

As outlined by TaxWatch UK, Rockstar North filed for a significant increase in its claims for Video Games Tax Relief with HMRC in the UK for 2018/2019. The claims were approved on the basis that its ongoing project is registered as 'Culturally British'; a historic tax requisite that allows video game developers to seek large subsidies for high cost productions with cultural ties to the UK.

Interestingly enough, a trusted Rockstar insider has also recently claimed that Take-Two Interactive, the studio's publisher, has been pushing for a faster and more frequent game release schedule, implying that GTA 6 could be coming as "soon" as GTA 5's Trevor Phillips himself has suggested.

With both PS5 and Xbox Series X primed and ready for release later this year, the concept of a next-gen GTA is certainly enough to dream about for now, but - in the meantime - be sure to follow GamesRadar for all and any Rockstar news as it's announced.