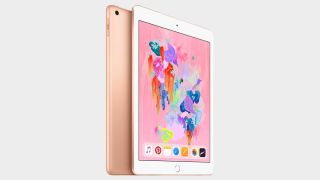 Looking for a truly awesome Cyber Monday iPad deal? Then look no further! Right now Walmart has a great discount on a 6th generation Apple iPad 32GB; you can get the tablet with a Gold finish, with WiFi and Cellular capabilities for just $329 – that's down from the standard listing price of $459.

Apple iPad 32GB Wi-Fi + Cellular- Gold | $329 at Walmart
Grab this fantastic Apple iPad deal while you still can. A saving of over $100 on this 32GB 6th generation tablet with Cellular and WiFi support. You don't want to miss out on this Cyber Monday deal!View Deal

This Apple iPad 32GB deal is one of the best we've seen so far on Cyber Monday. It isn't the only one though, and we are tracking all of those in our Cyber Monday iPad deals hub. That's where we will be listing the best and cheapest deals on the new 2019 iPad, the latest iPad Mini, and the most recent iPad Pro. However, all iPads are fair game these days, so older versions may pop into the hub, especially if a particularly good deal drops. Basically, keep your eyes on this page the closer we get to Cyber Monday itself.

Oh, and if you're looking for something awesome to play on your new tablet, why not check out our best apple arcade games recommendations. To get a look at the rest of the discounts from this weekend, be sure to check out all of the best Cyber Monday game deals too.