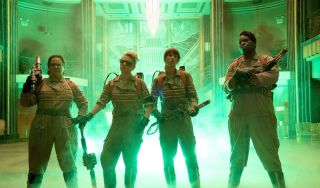 It has not been a good 2016 for online geek culture.

Whether it's the never-ending Marvel vs DC debate or the furore surrounding the upcoming Ghostbusters reboot, there have been far too many fans who have gone about expressing their opinions in the wrong way. Paul Feig has often found himself on the receiving end of online trolls these past few months, and he made his feelings on the matter clear in a recent interview with The New York Daily News:

"Geek culture is home to some of the biggest assholes I've ever met in my life. Especially after being attacked by them for months because of this Ghostbusters project".

While those are strong words, Feig is (unfortunately) 100% correct; there has been a scary level of online misogyny surrounding Ghostbusters ever since the reboot was announced, and all things considered the director has handled the vitriol relatively well. Until now, that is...

"I don't care what shape or size or color or anything they are", Feig continues. "I live or die on what things are funny and whether or not people will be entertained by them. (Melissa McCarthy) is just this hilarious woman who is so funny. I don't care what she looks like. As long as she's funny and is a professional. And she's hilarious".

I'm really hoping that Ghostbusters is so good that it forces certain naysayers to eat their words. We'll find out in a couple months.