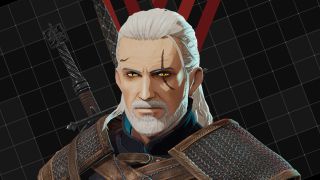 Geralt of Rivia has already appeared in The Witcher, Soul Calibur, and Monster Hunter World, and now he's coming to Daemon X Machina, the Switch-exclusive mech shooter released earlier this year. Not only that, as Nintendo of Europe announced on Twitter, he'll be joined by warrior princess Ciri as part of a free and utterly inexplicable DLC pack.

Soul Calibur I can understand - it's always had weird crossover characters, from Link to Ezio. And Monster Hunter? I mean, Witchers are literal monster hunters, so that's a no-brainer. But Daemon X Machina is not only an anime mech shooter - quite possibly the exact opposite of The Witcher games - but also a Nintendo exclusive. Then again, I suppose The Witcher 3 is on Switch now, and no, I still can't believe that. In any case, what the hell is Geralt doing here, let alone Ciri? What, do they have one sword for men, one sword for monsters, and a third never-before-seen sword for giant mech demon things? Besides, shouldn't they be out prepping for the Witcher Netflix series?

I have absolutely no idea how this crossover came about, but I honestly can't wait to see footage of it. Geralt's previous crossovers have all been pretty stylish, if nothing else, and Daemon X Machina is nothing if not flashy. And you know what, we're already this deep, so let's just go all-out. Anime Geralt in a mech? Pretty cool, pretty cool - but I think we can do better. Just give me a giant, pilotable mecha Geralt. Now that's a crossover.

Speaking of Netflix's Witcher: its visual effects supervisor reckons it will lean more towards horror than the games.