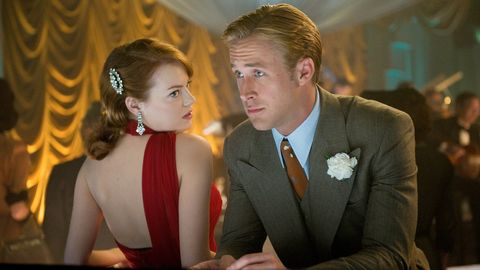 The first five minutes of Gangster Squad more than proves this, as a luckless thug chained between two vehicles is torn in half.

Another gets his fingers sliced off in an elevator fight. And a room full of goons get punched, stabbed, beaten and shot.

So far, so good then; a mobster movie without mayhem is as pointless as the proverbial blunt pencil.

But after this breathless opening, Ruben Fleischer’s 1949-set cops vs crims tale never leaves much of a lasting impression – unless, that is, we’re talking decibels.

Couple that with slugs, explosions and jazz, and here’s an early contender for loudest film of 2013.

Littering the landscape with more corpses than Fleischer’s 2009 zom-com Zombieland , Gangster Squad centres on “the war for the soul of Los Angeles”, as Nick Nolte’s Chief of Police tags it.

In the blue corner is Josh Brolin’s “honest cop” John O’Mara who, when not tending to his pregnant wife at home, is rescuing damsels in distress at work.

In a bid to bring him down, O’Mara assembles his squad, from Anthony Mackie’s switchblade-wielding Harlem cop to Giovanni Ribisi’s ’tech-head (“the brains to balance the brawn”).

On the surface at least, there’s much to admire, from the classy cast, immaculate production and costume design to a script that stings with salty one-liners (“He’s got a smart mouth but he’s dumb where it counts”).

But amid the bullet blizzards, it’s hard to feel much for any of the characters; there are times when the gangster-grotesques in Warren Beatty’s comic-book mob movie Dick Tracy feel more three-dimensional.

It doesn’t help that Stone and Gosling get less room to re-capture the chemistry that fizzed so memorably in Crazy Stupid Love .

Only a grizzled Brolin really packs a punch – in all senses.