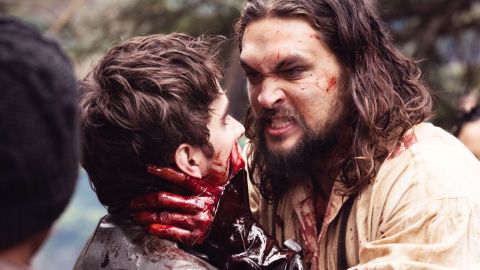 Jason Momoa is effectively just the burly man in fur in this underdeveloped story of the 1700s North American fur trade.

Frontier looks great on paper. Starring Game of Thrones and DCEU’s Jason Momoa in the lead, it was basically marketed as a fur trade version of Black Sails. ‘What could go wrong?’, I thought as I sat down to no doubt become obsessed with another Netflix Original. Well, as it turns out, a fair amount. After a promising start, Frontier suffers from a lackluster storyline and some seriously underdeveloped characters; proving that Netflix doesn’t always get it right.

Momoa plays Declan Harp, a fur trader of both Irish and Native American descent, who tragically lost his family in such an oh-so familiar tale of woe that I won’t bore you with specifics. Suffice to say, the big bad of the tale Lord Benton (played by Alun Armstrong) is responsible which basically cements this show as the classic ‘fight between two men’ type. Add in young whippersnapper Michael Smyth (played by Hemlock Grove’s Landon Liboiron) for the pair to pull back and forth like a rag doll and you’ve basically got the jist of the main plot. The problem is, this is the least interesting part of the show.

Watching the first episode of Frontier made me realise how few lines Momoa has in Thrones. Unfortunately, not much has changed. While Momoa certainly has more dialogue this time around, he fails to do much more than fill the role of big, burly man in fur who's the face of the show. It’s not really his fault as no doubt a lot of it is down to the script, but his character is drastically underdeveloped for someone who is supposed to be the central player.

When Benton makes his journey to North America to put a stop to Harp’s mischief, he makes a point of saying how much trouble the former Company man is causing the Hudson's Bay Company. The way he tells it, Harp is a criminal mastermind who uses his skill as a fur trader to best the company and steal its profits. Which would all make perfect sense if we saw Harp do a single thing related to the fur trade whatsoever in the entire season. All we get is one small conversation between him and the Riverwalker tribe about a business agreement which never happens. What an entrepreneur!

Benton isn’t much better as all he can think about is killing Harp, which, ok… fine, but given how little development both characters have, I have to wonder what they were doing before they both ended up on the same continent and within each other's reach? It’s like they just sprung up out of the ground for the start of the show, ready to hate each other, and given how much history the pair are suppose to have, this is far from believable.

When I said that this A storyline isn’t the most interesting part of the show, I meant it. But that doesn’t mean there aren’t interesting parts. While Harp and Benton are basically getting fuck all done except brooding over each other, the secondary characters are saving the day by actually having personalities and doing things. Thank god. Zoe Boyle plays Grace Emberly, the owner of the local ale house who is set on attracting as much influence and power to herself as possible. She has a relationship with Harp which is never really explained, but it’s her exchanges with Captain Chesterfield (Evan Jonigkeit), Benton’s right hand psychopath, that are most interesting. Theirs is a volatile relationship as they try to steal furs under the nose of Benton and ultimately make Chesterfield Governor.

On the other side of Canada we have Samuel Grant (Shawn Doyle), another businessman trying to get a monopoly on the North American fur trade, who is trying to strangle the Brown brothers’ business into submission. This storyline has more development but you can’t help but wonder why we're suppose to care. Other than the fact that they’re all (supposedly) in the fur trade, there’s very little crossover between this set of characters and the ones based in Fort James. We find out that Harp wants to meet with Grant in the first episode, but we don’t know why and the pair don’t clap eyes on each other until the finale.

The fact of the matter is, Frontier’s six episode season is just too short to accomplish much. I'm a fan of short seasons (by God, if AMC cut The Walking Dead down to 10 episodes a season I would be so happy!), but 6 episodes is REALLY short, and you have to be very clever with your character and plot development to make it work. It can be done but Frontier lacks the skills to succeed. We're asked to believe people change their allegiances at the drop of a hat and for no reason, that romantic feelings crop up between characters who previously have no chemistry, and that business partnerships can be cast aside with a couple of inconsequential murders.

Add to this that there's no satisfying conclusion to speak of, and you’re left wondering what was the point of it all. Neither Harp or Benton die despite each other’s best efforts to make it so, and the whole thing is obviously set up for its second season, which has already been greenlit. Everyone else is left at a similar loose end except for the few who did actually kick the bucket, the connections between the different story threads are still hazy, and, oh yeah, I still don’t know what Harp actually does with the majority of his time.

Jason Momoa is effectively just the burly man in fur in this underdeveloped story of the 1700s North American fur trade.