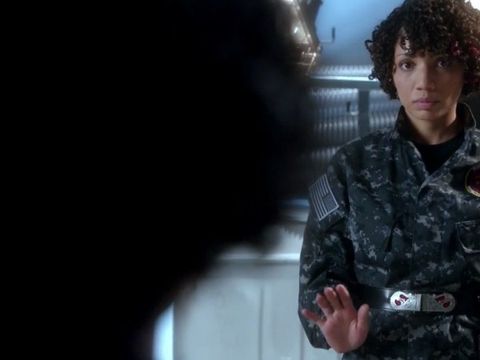 THE ONE WHERE David Robert Jones is scheming to collapse the two universes using the adult Cortexifan subjects. Seems the only way to prevent apocalyptic destruction is to close the bridge between the two universe.

UNIVERSE Over here and over there - orange credits.

VERDICT Last week's flash forward is abandoned as we find ourselves back in the present day facing the machinations of David Robert Jones. The jolt to the future and back again almost gave me whiplash, and there are now unanswered questions about how we get from here to there. Presumably the final season, announced last week, will be about getting from 2012 to 2036?

In the meantime, we have a story that sees the two sides collaborating against David Robert Jones (not seen on screen) and his duped army of Cortexifan subjects. He's brainwashed them into thinking we're at war with the other universe - not an unreasonable assumption since we've spent a lot of earlier Fringe episodes thinking the same. Our patience is rewarded as we realise the effects first experienced in " Welcome To Westfield " were actually tests for a bigger attack on the timeline, and that Jones and his hybrids plan to hide in the eye of the storm and repopulate the resulting fresh universe.

What stands out about this episode is the acting. Several of the characters are present in two versions, and the thesps have to act against themselves. It's wonderful to watch, with Anna Torv and (of course) John Noble in particular delivering perfect double performances. There are multiple boardroom scenes populated by two versions of the same team. Ultimately, this feels like an episode about reconciliation despite the final separation. Walternate supports Walter's argument in the debate, then they connect over their worry for Peter's existence. Fauxlivia and Olivia bond and give each other words of encouragement. Alt-Astrid's cute little wave to our Astrid silently speaks of a friendship that penetrated her Asperger syndrome. These moments of connection make the decision to split the universes apart incredibly poignant.

DIFFERENCES In the other universe, they haven't had a rainbow in over 20 years (light, apparently, doesn't shine through the atmosphere like it used to). Incidentally, according to Genesis the rainbow appears to Noah after the flood, symbolising that the world will not be destroyed again. Is the absence of this symbol in the alt-universe meant to be a sign of godlessness and destruction?

LMAO Walter nonchalantly pops a pill into the mouth of his test subject: "One more thing, have you ever tried LSD?"

POWERFUL STUFF Sometimes I forget that the Cortexifan subjects have special powers. Of course Olivia can cross between universes so maybe we'll see that again in future (see Speculation, below) but it was fun to see Nick Lane using his rather depressing "emotional leak" power to influence an FBI agent to self-harm.

SPECULATION It's still possible for them to cross between universes if they need to, right? Just the old fashioned way. For a start, we can presume that quantum entangled telegraph typewriter can still communicate, plus Olivia has the power to leap between worlds. And it's possible they could turn the bridge back on again if they need to.

OBSERVING THE OBSERVER At about 3:35 you can spot an Observer walking away from Sydney Harbour carrying a briefcase.

NITPICK With all their resources, would it really not be possible to find and shoot 27 people? Surely they have some technology to track down the Cortexifan subjects that they'd try first, before resorting to ripping the two universes apart?

BEST LINE
Nick Lane: And this makes perfect sense to all of you?!
Lincoln Lee: I find it best if you just go with it.