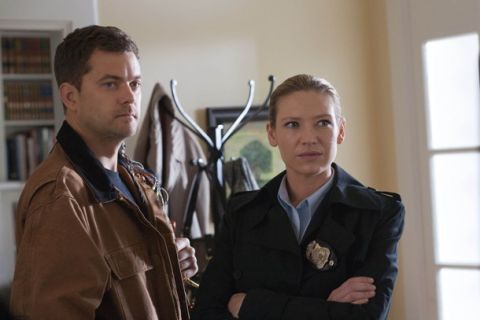 Living life in a bubble...

THE ONE WHERE Weird time bubbles start appearing around Boston, transporting things from four years into the past. Could Peter's reappearance be the cause?

VERDICT A blink-and-you’ll-miss-it moment at the end of the previous episode (in hindsight, our speculation that the reappearing FBI agent was a shapeshifter was almost definitely wrong ) becomes the basis of this week's outing. Peter’s erasure from history has obviously given the writers a taste for playing around with timelines, so now we see glitches in time on a much smaller level. It’s excellent subject matter for a case of the week, with “bubbles” of the past creating (spherical) windows to some clear and present danger – the sudden appearance of a train on an abandoned railway line and a newly-built tunnel full of soon-to-be-flooded motorists are particularly effective.

Everything points to Peter being the cause of the wobbles in time but – while it seems likely that his reappearance played at least a small part in creating the wonky continuum – the fact that it proves to be down to something else entirely is an ingenious, typically Fringe -ian piece of sleight-of-hand. Indeed, this plays out as one of the show’s most human and touching storylines, as a man tries to use his wife’s cutting-edge physics research to go back four years into the past and save her from the early-onset Alzheimer’s that afflicts her in the present. There are echoes of excellent season two episode “White Tulip” in the way a tale of love and sacrifice plays out against a background of Fringe science.

There may be no shapeshifters or trips to parallel universes, but this is still a great episode for the overall Fringe arc. Peter’s return to the show has brought with it a brilliant return to form – he’s such an essential part of the series dynamic that he makes every other character better, even though these versions don’t really know him. As he tries to prove his worth all over again, there are some great, subtle moments as you see the previously hostile Olivia warming to an (as far as she's concerned) newcomer who looks at her like she’s his girlfriend.

But, as ever, the main plaudits have to be saved for John Noble’s Walter, whose refusal to accept his son’s return has evolved into outright hostility. Come the end of the episode there are hints that a grudging respect might be developing, but it looks like this antagonistic relationship could be one of the cruxes of the season – assuming, of course, that Peter doesn’t find his way back to the version of our universe he used to call home.

IT'S WOTSISNAME Time-tinkering husband Raymond is played by Stephen Root, a regular voice actor, TV guest star (he’s had recurring roles in Pushing Daisies and True Blood ), and Milton in cult fave movie Office Space . His genius of a screen wife, Kate, is played by Root’s real-life other half Romy Rosemont, who Glee ks might recognise as Carole Hudson.

OBSERVING THE OBSERVER He’s walking past the apartment complex at the beginning of the episode, just before time starts to get a little bit glitchy.

NITPICK Considering they know so little about Peter, the Fringe team (Walter excepted) are very quick to absorb him into their ranks and let him wander around freely. And it’s a good job that no salesmen have called at that scientist’s house for a couple of days…

SPECULATION Peter was suffering from time slips when other people didn’t appear to be. Could that be linked to his “out of time”-ness? Maybe he attracts disturbances in the space-time continuum?

BEST LINE
Walter: “Astrid. I need a computer battery. And a spool of copper wire. And a climbing harness. And some rubber cement. I think it’s in my Spider-Man fannypack.”