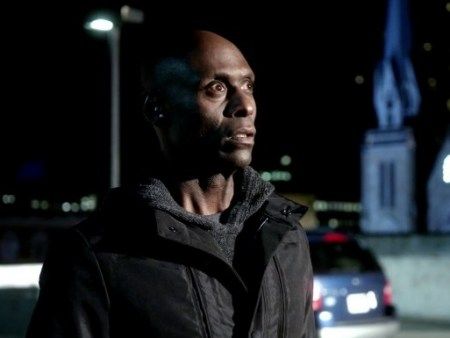 VERDICT Following the separation from the other universe last week it feels like the show is smaller again somehow. But the devil is in the detail in this, the penultimate episode of this season. For instance, did you spot that the cross design on the nanites is the same symbol we saw on the unknown assailant from the animated airship back in "Lysergic Acid Diethylamide"? Did you notice that the shot of Walter at his old desk in the St Claire's facility matches our earliest shot of him in the very first episode? How about the mention of "a nursery" for Olivia and Peter, a reminder that we've already met their daughter Etta ? There's a feeling that this episode is part of a continuum, plugged into everything that's gone before.

Whereas we had potential global destruction last week, this time the threat is a weird “case of the week” that affects one local shopping mall. Fortunately the attention to detail and respect for the show’s mythology helps this episode overcome any aura of claustrophobia. Well, that and the sudden return of Leonard Nimoy as William Bell. (What do you mean, you thought he’d retired? The man’s a legend – he’ll never stop.) I applaud the showrunners for keeping his return – in person rather than as a voiceover or a face in amber – a secret until now. That he was the mastermind behind David Robert Jones all along comes as little surprise but means a tremendous showdown between Walter and Bellie is surely imminent.

This is also an episode where Olivia’s Cortexifan powers being to fully develop. Here she manages to cool Jessica down and use psychic influence to disarm two guards, extensions of previous powers we've witnessed in the show. That she can extend this ability to controlling Peter like a puppet during a fight is a little bizarre, mind you. And Olivia isn't the only woman kicking some ass; Astrid demonstrates that she's as much a front-line FBI agent as the rest, defending Walter in the almond warehouse, thumping one guard and shooting another.

And then: disaster. Astrid is shot. I wasn't expecting it and it’s reminded me how much I care for Jasika Nicole’s character. Surely that can’t be the end for her? Using a lemon cake, Walter had already shown Astrid how Cortexifan has regenerative properties. It would be handy to heal and regrow cells now that a key character has been injured...

IT’S WOSSERNAME The British nurse Jessica Holt is Rebecca Mader who played Charlotte in Lost . Mader is a self-confessed Fringe fan and she took part in the hilarious Peter Bishop audition viral .

PAINFUL PRODUCT PLACEMENT The plug for Sprint mobile payments is intrusive. Walter even comments, "What will they think of next?!" when the phone is spotted at the crime scene.

RETROSPECTIVE INTERPRETATION So, the man in Olivia’s animated season three vision had a cross on his t-shirt that Walter now identifies as Bell’s signature. Does it mean he was a representation of Bell himself? Or was he a metaphor for these killer nanites or Bell’s plan generally? Seeing as that vision took place in the old universe before Peter was erased by the machine, maybe they don’t relate to the current crisis at all; but then it would seem unnecessary for the showrunners to symbolically remind us of him.

RELIGIOUS IMAGERY Last week I speculated that the rainbow might have Biblical symbolism; this time the Christian iconography is much more blatant. Olivia and Jessica chat in front of a church, where we can see a glaring sign with the chi rho monogram (the letters XP superimposed, meaning Christ) with the letters alpha and omega (from The Book Of Revelation: “I am the Alpha and Omega, the first and the last”) on either side. Then towards the end of the episode, Walter and Astrid head to the docks where the warehouse is labelled “Eden”.

IS IT JUST ME? I like to think it’s a joke by the scriptwriters that when Walter wants to visit the almond importers by the docks, Astrid says, "This is nuts!" (Note to pedants: I know almonds are technically seeds not nuts.)

OBSERVING THE OBSERVER The hardest to spot for a while! At 4:30 there’s an Observer standing right by the ambulance, but you can only spot him from a distance when the camera pulls back.

DID YOU SPOT? The half of David Robert Jones’s face that crumbles away when he’s killed matches the half of his body that was destroyed back in “There’s More Than One of Everything” (season one) when Peter cut him in half between universes.

STILL TO COME Now you've seen this episode, feel free to watch the spoilery but awesome trailer for the end of the season .