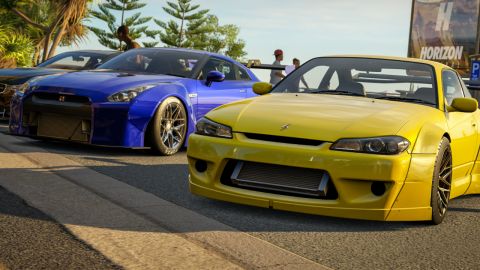 A superbly-produced, feature-rich racing game. Too much of it may feel like busywork and filler, but few other racers are this slick or feature-packed, and it certainly has moments of magic.

We're living in the future. The Horizon Festival of motoring madness has upped sticks from Europe and moved down under, which means you get to race everything from beach buggies to hypercars (and a Reliant Regal, if you can find it), in a gorgeous realisation of Eastern Australia’s Gold Coast. The freedom is greater than ever, not only geographically, but in terms of the events themselves. You can street race BMWs around the streets of Surfer’s Paradise, crash a Ferrari F40 through dense rainforest or kangaroo hop a 4x4 through the dusty undulations of the outback. And somehow Forza Horizon 3 manages to maintain the tight, slick cohesiveness and detail of a modern track racer.

The most obvious example of Forza's futuristic ethos is its visual finesse. Even if this wasn’t an online, open world game, it would still look impressive. So the fact that you can admire hills in the distance from the immaculate interior of your Pagani Huayra and then just go and drive over them at any time is pretty incredible. Some sections conjure up memories of Motorstorm, but mostly the game is channelling Dirt 2 thanks to the constant festival vibe. It’s certainly the most coherent presentation style seen in a racer since that game. There are day/night transitions and wet weather too, all delivered in super-solid fashion. Barring some forgivable redraw in dense forest areas, the visuals are damn near faultless.

In Horizon 2, you controlled a rookie, but now that rookie is a big deal and executive director of the Horizon Festival. You even get called ‘boss’ over the radio, which doesn’t hurt the ego. You can use ‘Blueprints’ to create, play and share challenges (just like Driveclub), and decide where to build each new festival site as your audience grows, before choosing which sites get expansions first, allowing you to spend more time doing what you enjoy. Perfect. You even have to sign up radio stations one at a time, which lets you hear the music you like instead of the usual mix. Not only is the included licensed tracklist superb, there’s also a station dedicated to – and a free trial for – Groove Music, so you can set up playlists of anything on there.

The online integration offers everything you could ask for, from an offline solo adventure littered with leaderboards, friend challenges, and the aforementioned event creation/sharing, to plain old multiplayer races and four-player co-op cruising. There are also new car meets where you can do drag races and ogle each other’s rides from rudely intimate angles. Online races are solid, but it’s interesting that the map isn’t populated by online drivers unless you pause and connect to a game. At least that means that – unlike The Crew – you can play it totally offline if you want to, which is very welcome.

The driving is slightly simplified compared to Forza 6, but it’s more accessible to play. Similar to the Need For Speed Underground games of old, you’re often dealing more in sweeping arcs of turning rather than point and squirt, twitch-reflex racing. Is it dumbed down? Perhaps a little, yes. You don’t need to engage your brain too much to have fun here.

It’s a very easy game to like, but there are some problems that keep this from a universal recommendation. For starters, the skill system is a little suspect. While the idea of racking up points by stringing together jumps, drifts and destruction (then banking it before you crash) is excellent, Australia’s open nature makes it far too easy. You can just drive in circles in one of the wide-open plains, racking up points to spend on the three skill trees.

And that’s not the only element scuppered by the setting – Rival challenges are pretty pointless. You see a Drivatar that you could recruit to your team of three to help you earn credits, then challenge it to a race… at which point it sticks to the roads while you make a beeline for the finish point across the fields. Unless you hit a tree, there’s simply no contest.

Secondly, it’s far too straight-laced. While it’s refreshing to play a Triple-A game that’s completely family-friendly, the action feels painfully polite. The AI doesn’t play dirty in the slightest, vehicle handling is mostly pretty loose and bordering on cumbersome, and the worst that happens in a collision is that a wing mirror falls off. There’s rarely any edge or real excitement. The Horizon Festival is supposed to be one huge automotive party. If it is a party, it’s one where nobody is allowed to drink and everyone’s on their best behaviour because their parents are playing Bridge in the corner. But hey - at least the music’s great.

Thirdly, it really could do with more of the showcase races. They’re carefully curated, dazzling showpieces for racing on Xbox One and always impressive, if a little manufactured. But they only appear every few hours, highlighting the rather mundane nature of the hundreds of other events you’re dutifully completing. Too much of the game feels like busywork.

Finally, while the makeshift look of the circuits may well fit the narrative, it makes for disjointed, slightly unsatisfying driving. With one foot still entrenched in the Forza series’ love of the licensed real world, it seems the other can’t make a big enough stride into arcade territory to make the game as exciting as it deserves to be, and the tracks are mostly banal and forgettable. Burnout Paradise is almost nine years old, but it’s not constrained by reality, and as a result it’s still utterly spectacular, and more fun to play.

But never mind what it isn’t. Forza Horizon 3 is a very high quality video game, with a multitude of amazing features, great visuals, a stonking soundtrack, exemplary online integration, insane speed (at times) and solid handling. You won’t need to think much while you play it, but if you’re talking about places to just cut loose and enjoy the breathtaking scenery, Australia is a fine place to do it.

A superbly-produced, feature-rich racing game. Too much of it may feel like busywork and filler, but few other racers are this slick or feature-packed, and it certainly has moments of magic.