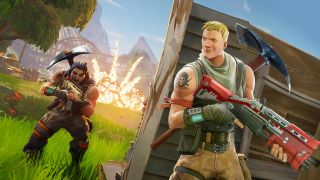 “Oh damn, PUBG in Fortnite” wrote one player in my Battle Royale lobby, moments before we were due to fight it out to the death amongst 98 other players, Hunger Games style, on an ever-shrinking island arena. Despite the impending doom, he was definitely onto something.

Fortnite Battle Royale is Epic Games’ effort to imitate and build upon the success of Player Unknown’s Battlegrounds, the surprise PC hit currently breaking every sales record imaginable on Steam, and can you really blame them? Fortnite (one part third-person shooter, two parts survival-crafting game) already boasts the ideal skeletal structure for a new entry in the Battle Royale genre, making the price of imitation worth the rewards for both the studio and its fledgling player base.

After soft-launching Fortnite almost two months ago, Epic announced the new Battle Royale mode out of the blue this week, with the free update due for an official release later this month. Better yet, players who already own Fortnite can try Battle Royale out for themselves right now in the public beta, now live across all three available platforms - PC, PS4, and Xbox One.

For those who haven’t put the two and two together, this automatically makes Fortnite the next best alternative to PUBG for PS4 and Xbox One owners, who have been patiently waiting for the internet phenomenon to hit consoles for what now feels like an eternity. That is, of course, assuming that Fortnite Battle Royale is worth playing at all. I jumped into a handful of rounds on PS4 to find out.

First things first, this is a public beta for a game still in Early Access, so don’t expect any quality of life assurances from Epic. Seriously, a big warning announcement pops up almost as soon as you enter a lobby, freely admitting that “the servers will probably break and there will be other crashes and bugs”. At least you can appreciate Epic for being upfront about it.

Technical mishaps aside, what I do prefer about Battle Royale over something like PUBG is, incidentally, a direct offshoot of what made me first fall in love with Fortnite when the game went Early Access back in July.

Epic’s jovial creativity, for starters, is just as manifest in this mode as it was in the game's wave-based campaign. Players don’t drop into the island from a cargo plane, but from a musical battle bus held afloat by an air balloon. Instead of deploying parachutes, combatants hover above via mechanical contraptions known as Gliders. And you can forget about starting with any military equipment; your default tool is a comically giant pickaxe.

That pickaxe is important too, as Battle Royale’s other unique feature is its incorporation of Fortnite’s resource gathering and crafting elements. As per usual, your first instinct when hitting the ground is to find a weapon for self-defense, but players will also start whacking away at nearby structures to acquire wood, metal and other materials for building advantageous shelters.

As time is of the essence, and the conflict zone is continually shrunk by the onset of an encircling storm (another feature cheekily borrowed from Battlegrounds), you won’t be building any elaborate forts in Battle Royale. Instead, the best course of action is to prioritise utility over creative flair, and Fortnight's easy to use crafting controls ensures that the building process can be conducted with both speed and precision, free of any niggling obtrusions.

This crafting dimension introduces something fresh to a genre that’s already replete with stale imitations, and Epic Games was smart to mould this particular aspect of Fortnite into its new mode. In each and every match, I came across all sorts of cleverly designed forts, from a simple but effective sniper’s perch to a trap-filled bunker occupied by someone who clearly enjoyed watching any invaders try to make it through his Saw-like obstacle course of hazards.

By encouraging these strategic spurts of improvisational DIY, Battle Royale enjoys putting player creativity under the pressure cooker and watching the ensuing fireworks unfold. The in-game results of this experiment are often as entertaining to interact with as they are adversarial to your chances of survival.

All that being said, the inevitable comparison to Battlegrounds also reveals where Battle Royale is lacking, both in terms of depth and breadth. Key omissions of features like vehicles, armour management and even the ability to go prone means Battle Royale doesn’t hold as much of a competitive or tactical edge as its main inspiration, though that could be spun as a positive if you prefer your virtual death tournaments served with less of a sting.

Fortnite's unfriendly user interface and handful of glitches also doesn't help sell it to the masses just yet, as they keep things from running as smoothly as preferred. Still, as with Battlegrounds, the experience will only improve as Epic Games works continually behind the scenes to furnish both Battle Royale’s balance and the game’s wider shortcomings in general.

Bugs or no bugs, I’d be lying if I said I’m not having fun in Fornite: Battle Royale, which has enough spirit and novelty to present itself as a viable alternative to the alpha dog currently dominating the genre, especially if you’re a console player who wants to know what all the fuss is about. The mode officially launches on September 26th, but it’s worth investing in Fortnite now if you’re interested, as it's currently 25% off. Pick it up, and chances are I’ll see you in the battle bus!