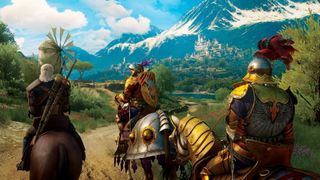 The Witcher 3's Geralt sure does get around in his quest to kill all the monsters in the Northern Kingdoms, taking in the sights from the humble farming fields of Redania to the vibrant French stylings of Toussaint. Here are some of the places he’s been on his witchering travels in The Witcher 3: Wild Hunt.

One of the Four Northern Kingdoms in The Witcher series – Redania, Kaedwen, Aedirn and Temeria – this is where much of The Witcher 3 is set. It’s a kingdom ruled by its class system, where the nobles are treated like – well, like nobles, and the peasants are treated like something on the bottom of the nobles’ shoes. Ew, get it off. Dirty.

The free city of Novigrad is a beautiful, eastern European-style locale full of wonderful architecture, dangers and quite a few secret gangs. Of course, for Geralt, it’s also where most of the shops are, and that’s what’s important. Like any good city, Novigrad also has an undercurrent of intrigue, murder and roguish behaviour – you just have to know where to look.

In case you can’t tell from the thinly disguised name, Oxenfurt is a university town, and it’s where a large part of the DLC Hearts Of Stone takes place. It’s a much fancier place than Novigrad, with Tudor-style architecture and manicured gardens, but that doesn’t mean it’s not still a wretched hive of scum and villainy – there’s a reason for there being a prison, after all.

Much of the first Witcher game is set in Temeria, or more accurately, Vizima and the surrounding area, which is the kingdom’s capital city. Temeria is ruled over by King Foltest at the start of the series, but soon comes under the rule of notable arsehole Radovid in The Witcher 2. By The Witcher 3, he’s murdered in cold blood by one of his enemies. Not surprising.

Royal city Vizima is where King Foltest of Temeria – and, later on, Emperor Emhyr var Emreis – live. It’s appeared in the first and most recent Witcher games, notably in The Witcher 3 as the place where Geralt gets bathed, shaved and grilled (not literally) by a bunch of Emhyr’s servants. Oh my!

This is the city where Ciri, Geralt and Yennefer’s adopted daughter, is from – she’s the princess of Cintra, the granddaughter of Queen Calanthe of Cintra – although she probably can’t travel back there after it was razed to the ground, killing her grandmother. Not the best place to go back to, really. Bad memories.

Another of the Four Northern Kingdoms, Kaedwen is to the north-east of the continent, and it’s where Witcher HQ and occasional training ground Kaer Morhen is situated. It’s also notably the home of Kaedweni Stout, a Guinness-like drink that Geralt can imbibe to restore health (and get WASTEEED).

A half-collapsed castle set in the mountains, Kaer Morhen is where Witchers used to train and learn to fight. By the time The Witcher 3 occurs, the castle is in ruins – but old friend and old guy Vesemir is still living there, and it’s with his help that you train Ciri, just like the Witchers of old.

To the south of Kaedwen is the kingdom of Aedirn, the home of many dwarves and an economy based on the metals and materials gathered from the mountainous regions that surround the area. It’s where Flotsam, one of the first towns you visit in The Witcher 2, can be found – and its resident beast-to-be-slayed, the Kayran.

This beautiful city perched on a cliff high over a lake is an important part of The Witcher 2’s plot – it’s where the final meeting takes place in the game, to decide what happens to Temeria after the death of its king, and it’s then where a huge battle breaks out where lots of people die. The same could be said of most cities in The Witcher, really – diplomacy, then death. Lots of it.

The Vengerberg is coming, and everybody’s jumping. The ‘Berg is the home town of Geralt’s long-time lover and unpredictable sorceress, Yennefer. Although it is only mentioned in passing in the main Witcher games, it’s a location in the Witcher board game – though you can’t play as Yen, which is unfair.

Down the road from Yen’s Vengerberg is Rivia, perhaps best known as the place Geralt of Rivia is from. But actually, he’s not from Rivia at all – he just got tangled up in a battle for Rivia, accidentally aiding the cause by walking into the middle of it all and being forced to help out. That’s the Geralt we know and love!

If you were worried that the European influences on The Witcher were limited to everything east of Poland, then check out Toussaint – the location of the fantastic DLC Blood & Wine, and also hundreds and hundreds of French people. And cheese. And wine. It’s a magical place where the alcohol flows freely and the colour saturation is set to 300 per cent. Just like real France!