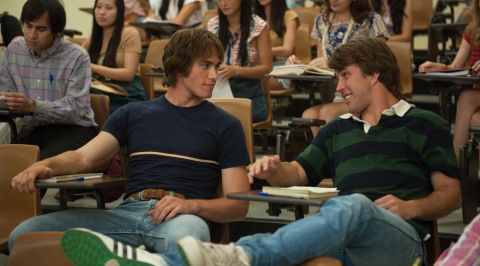 Party on, dudes! With tracks from Blondie, Van Halen, Sugar Hill Gang, The Cars and more, Linklater’s frat-pack com is an absolute blast. Prepare to be amazed and amused.

After the intimacy of Before Midnight and Boyhood, writer/director Richard Linklater here returns to the kind of freewheeling dramedy with which he made his name in the early ’90s. Everybody Wants Some!! is, in fact, a “spiritual sequel” to his ’93 classic Dazed and Confused, with both movies disposing of plot to instead offer anthropological studies of teens in Texas – drugs, sex and rock ‘n’ roll.

But where Dazed was set in 1976 over a 24-hour period as high school let out for summer, Everybody takes place in 1980 during the first three days at a fictitious college.

More male-centric than Dazed, the film follows freshman pitcher Jake (Blake Jenner of Glee, but don’t hold that against him) as he hooks up with his baseball buddies. These highly competitive jocks don’t take to the field until 80 minutes into the movie, and then not for long, but they play hard nonetheless: table football, ping pong, darts, pool, pinball, Space Invaders, and, of course, chasing ladies, with evenings dedicated to getting wasted and laid.

And that, pretty much, is it, though Jake is the most sensitive and thus gets a romantic subplot with fine arts major Beverly (Zoey Deutch). Here, the pleasure is all in the hanging out with these moustachioed males, listening to their merciless badinage and their “adaptive” chat-up lines as they trek from discos to country bars to punk gigs in search of a good time.

There is, of course, a thin line between banter and bullying, flirting and predatory behaviour, and some antics might rub modern viewers the wrong way. But kudos to Linklater for staying truthful – he attended college on a baseball scholarship himself, so he knows these guys, at this time.

Still, any Neanderthal behaviour is made not just palatable but laugh-out-loud funny by Linklater’s sly undercutting of all this ridiculous macho posturing, and by the sheer charismatic force of a fresh-faced ensemble who demonstrate sweet hearts under salty behaviour. The names Tyler Hoechlin, Glen Powell, Temple Baker, J. Quinton Johnson and Wyatt Russell (son of Kurt) might not mean anything now, but then nor did Ben Affleck, Matthew McConaughey, Milla Jovovich, Joey Lauren Adams and Adam Goldberg when Dazed came out.

Everybody in Everybody smashes it out the park, playing dreamers who exhibit a voracious lust for life as they quest for identity. Well, these actors might have found theirs – the next generation of leading men.

Party on, dudes! With tracks from Blondie, Van Halen, Sugar Hill Gang, The Cars and more, Linklater’s frat-pack com is an absolute blast. Prepare to be amazed and amused.