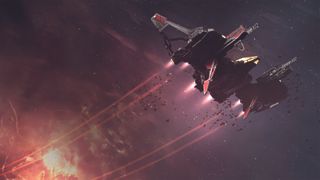 The phrase '10,000-player deathmatch' – whether it fills you with excitement, dread or simply curiosity – is difficult to ignore. Creating one was the ambitious goal of Hadean, a London-based engineering company specialising in large-scale simulation. And at this year’s GDC, with the tech demo Eve: Aether Wars, it hit it. The number of concurrent human players peaked at 2,379: including AI, the deathmatch topped out at 10,412 participants. A cumulative total of 3,852 human pilots battled alongside 10,422 AI pilots, bringing the full number of combatants to 14,274.

It’s the sort of outlandish space fracas you might associate with, say, CCP Games. Lo and behold, the Eve: Online maker is involved, as evidenced by the tech demo’s name. Eve: Aether Wars uses assets from CCP’s games – some from Eve: Online, the majority from Eve: Valkyrie. But Hadean is doing the heavy lifting on the technical side. Powered by HadeanOS, Aether Engine is the world’s first distributed gaming engine: it’s able to partition large virtual spaces, remaining flexible enough to meet specific and ever-shifting needs.

"You can basically allocate arbitrary amounts of CPU and computation to where it’s needed," architect Matthew Dobson tells us. "So in a game world, you might have events that are happening, maybe some big bosses spawn and players are gravitating towards them. That part of the world now requires a lot more resources."

In Aether Engine, each processor core manages a chunk of data. Each chunk communicates with the others, so that players can move between them without interruption – some even exist inside others, which is what allows developers   to have games adapt on the fly. We’re reminded of SpatialOS, Improbable’s cloud-based solution to creating persistent large-scale multiplayer game worlds. But Hadean’s differs in key areas. HadeanOS is natively run across multiple servers, and doesn’t rely on middleware. "We’re not trying to network and glue together a bunch of existing Unreal or Unity servers,” Dobson says. "So when this needs more resources, it can spawn up new servers, and use cores and memory from those."

That approach attracted CCP CEO Hilmar Veigar Pétursson's attention in February of 2018 when Hadean visited CCP's offices. "Immediately we hit it off," he says. "And when I got into a little of what they were actually doing and how they were doing it, it reminded me a lot of an architecture we ourselves at CCP had on the design table in around 2010." CCP had decided not to build it – it was too early, and too much of a challenge to make a generic solution – but Hadean’s approach was so spiritually aligned that it made sense to support it.

Hypothetical talks began: What if they were to build an Eve game in the engine? "I made little requirement statements, which included 10,000 spaceships, without any time dilation, line-of-sight occlusion and all those kind of things," Pétursson says. "Out of that, we started to develop the concept of Aether Wars. We’d take spaceships from Eve: Online, make a technical prototype in Aether Engine, and see if we could get 10,000 people to join it – and what would break if we did." Surprisingly little, it turned out. Flooded login servers delayed the event by about 30 minutes; otherwise, Aether Wars ran extremely well. Both Hadean and CCP are keen to repeat the success, and push the prototype even further.

There are numerous benefits of testing the limits of the virtual worlds we can build with this sort of technology, one of which is opening up possibilities for designers – rip the limiter off one variable, in this case scale, and developers may start to create entirely new genres. Hopefully, some of them will be good: we can’t help but wonder whether anyone really wants a 10,000-player deathmatch. Indeed, one of Hadean’s first ideas for this tech demo was a 10,000-person battle royale, before CCP pointed out that the first players to die would be receiving a raw deal. "Is it a fun thing to do?" Pétursson says. "I don’t think it will be. But herein lies the opportunity. Who would think that going to Wembley stadium to watch 22 people argue over a ball would be fun?"

"Doing things together as a shared experience is something fundamentally human. Unfortunately, games lack the technical capabilities, and developers lack the imagination of what would you do in that setting, because it’s not obvious – it requires a lot of experimentation." With CCP having field-tested this subject with Eve: Online for a decade, it’s Pétursson’s firm, and ones like it, that can lead engineers such as Hadean’s in new directions. "I’ve never really seen CCP as 'just a computer-game company'," Pétursson says. "We want to explore the boundaries of human achievement on a large social scale. And every tool like the Hadean event, with which we can make it even more spectacular, seems like the path to explore around business."

This feature first appeared in EDGE Magazine. For more excellent features the one you've just read, don't forget to subscribe to the print or digital edition at MyFavouriteMagazines.