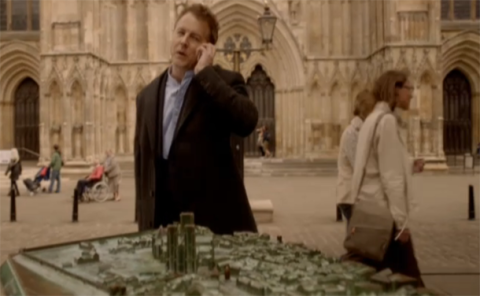 Getting better, but is it too late?

THE ONE WHERE Zak and Tom prosecute a woman accused of stabbing her stalker, causing Tom to have a crisis of conscience.

VERDICT Well, that was unexpected. After three distinctly average episodes suddenly a few things have clicked into place and, after the downbeat and surprising ending of the legal story of the week, for the first time you may actually look forward to the next episode.

The angels’ conflict at carrying out Mr Mountjoy’s will when they can’t understand it is both well portrayed and – when Tom is finally able to convince his grumpy colleague to listen to his concerns for the mother of the murdered boy – quite sweet.

There are still some bits that don’t quite sit right – Zak’s unique brand of grief counselling is uncomfortably cheesy. Meanwhile Tom intervening to stop Gemma jumping from the railway bridge is possibly one of the most moving moments of the series so far, but overall his broody, argumentative celestial adolescence is rather annoying, making Mrs Sheringham’s despatch of Jude to Durham a blessed relief. If only she could do the same to Hannah.

Richard is on brilliant form, making Tom question exactly what Mr Mountjoy is asking him to do. Paired with his gleeful confrontation with Zak outside the pub you can’t help rooting for the dark side a bit – it’s just so much more fun and finally Pembroke seems a worthy nemesis to our angelic heroes. The life and death / angels and devils side of the Eternal Law story has always been more exciting than the latest legal machinations and it’s really seeming to gain momentum. That Doomsday clock is ticking quickly all of a sudden...

LAW 101 We’re no legal eagles, but surely the discussion between Tom and Zak about how to argue that first case during breaks in the court session is too late in the game to be useful?

HE’S EEEEEVIL Bribing journalists to bring about a mistrial? Pembroke is very sneaky – although you can’t help thinking that kind of hackish behaviour is more News Of The World than local paper.

DATED POP CULTURE REFERENCE OF THE WEEK Poet Pam Ayres, teenage girl detective Nancy Drew and, “how do you like them apples?” – are we to understand Zak’s a fan of Good Will Hunting ?

CONTINUITY? In the first episode Tom seemed fairly clueless about his mission on Earth, but here we’re told he had legal training before he arrived.

Richard Pembroke: “Do you know why he [Mr Mountjoy] doesn’t show himself? Because he wants them to love him unconditionally. Like some kind of cosmic Katie Price.”

Read all our Eternal Law reviews