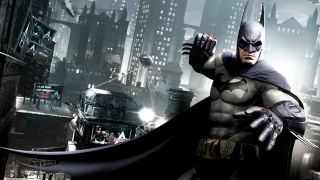 All things considered, this is a stellar bunch of bat-games - which would normally cost $120 on the Epic store - that you can get for absolutely nothing. All six games will be free until Thursday, September 26, so get them while you can.

If you've somehow missed the bat-train for the past decade or so, let me bring you up to speed. The Batman: Arkham games are third-person brawlers with a healthy dose of RPG elements, exploration, and superhero fan service. The series' combo-driven combat system has been borrowed by many games since its release, and for good reason. Punching dudes as Batman is just plain fun, and the later entries really dial up the sandbox side in cool ways.

The LEGO Batman games are even easier to explain. By and large, they're pretty typical action-adventure LEGO fair - cute, fun, and surprisingly compelling. The Batman games are among the best in the LEGO series - especially the second one - and whether you're playing them on your own or with your kid, they're a fun ride worth taking.

Again, all six of these games will be free on the Epic Games Store until Thursday, September 26, when they'll be replaced by Everything (the game, not the entirety of existence) and Metro 2033 Redux.