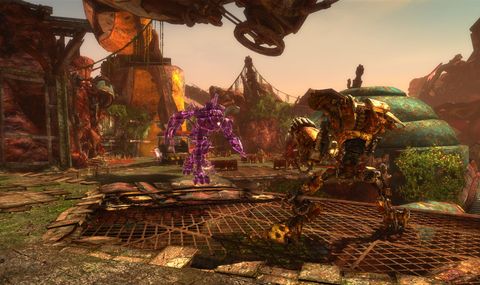 Someone at developer Ninja Theory has a thing for redheads. Looking back at the studio’s previous effort, Heavenly Sword, the similarities between that outing’s heroine Nariko and Enslaved: Odyssey to the West’s Trip are unmistakable: both have scarlet hair that hangs over their faces in tendrils, both have beautiful, expressive faces, and both kick ass – wait a minute, no, that’s not right. Trip’s a downright wuss. Actually, that’s what we like about her. She’s an interesting take on the damsel in distress: instead of getting into trouble and calling for help, she plans ahead by knowing she’ll get into dangerous situations and so forces the nearest muscle-bound meathead into protecting her.

Above: For a meathead, he's actually a big sweetie

This scenario, and the game in general, is inspired by the old Chinese myth Journey to the West. In that story, the character that inspired Trip is actually a male monk who commands the mystical Monkey King with a magic headband. In Enslaved, all magic is replaced with technology because the setting is post-apocalypse. The Monkey in the story is named just that – Monkey. He claims he doesn’t have a name, but that the people he trades with call him Monkey, and once the player takes control of him, the reason for his name becomes obvious: he climbs like a monkey, he hunches over in primate fashion, he’s always barefoot, and the sash hanging from his belt looks like a tail once he gets moving.

After playing through Enslaved we went back to look at Heavenly Sword, and other than the aforementioned affinity for redheads, another thing becomes evident: Ninja Theory wants to be the storytelling game studio. Or possibly, the ambitions are higher: to push storytelling in all videogames forward. Whether that is the developer’s ambition or not, they have achieved it. Heavenly Sword accomplished a new standard in cutscenes by putting the acting, motion capture (especially facial expressions), and dialogue of other games to shame. The characters in the cutscenes felt like real actors in a real movie, displaying quirks and personality in a way that possibly no other game has.

Above: This ain't no dusty, irradiated wasteland

That is, until Enslaved came along. Comparing the story elements of Heavenly Sword and Enslaved on their surface might make Enslaved appear as a step backward, since the dialogue is more understated and the characters less flamboyant. Yet what Enslaved represents is a more mature approach to storytelling, and by being more subtle (and even ambiguous in many of its character’s reactions to each other) it develops quite an emotional payoff. Need a game to justify the gaming medium as legitimate for storytelling? Look no further.

The difficult part is talking about how the story is strong without ruining it, so we won’t give away any plot points or big reveals. Besides, the game shows right off the bat it means business in a spectacular first level. Something about Monkey is immediately likeable – he has the expectedly gruff voice (done brilliantly by Gollum himself, Andy Serkis), but it doesn’t sound like he’s gargling pebbles in a phony attempt to sound manly. There’s a tinge of softness to him, a slight vulnerability in his eyes, even when he’s pissed off. As he escapes the slave ship a series of harrowing close calls occur and we see that not only will the characters be engaging, but the action will break expectations.

We enjoyed Enslaved’s combat quite a bit, but it’s not a complex affair and people hoping for God of War (or Castlevania: Lords of Shadow) levels of combos and special moves might be disappointed. Enslaved aims for tactical combat, so it’s a bit more methodical. Monkey uses his fists and expanding lightsaber-ish staff to beat the piss out of various mechs, and he does it with panache, but the combos are simple – mash either the light or heavy attacks, but there aren’t air-juggles or tons of combos to unlock. Still, Monkey can dodge-roll, block and counterattack, perform wide group-clearing attacks and charge up stun moves. It’s enough to keep the combat fun and tense, but this isn’t a hack-and-slasher. Combat is just one part of gameplay – the others being climging and exploration, along with a bit of sneaking around especially dangerous enemies (but it’s no shoehorned attempt at stealth gameplay – there are no instant lose scenarios if you’re caught).