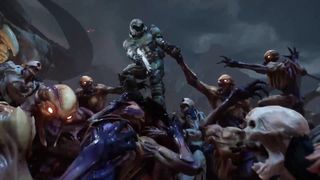 The launch trailer for Doom is only a minute long, but it's spattered with loving nods to the game that started it all. From the industrial remix of the trademark E1M1 music to the game-assets recreation of the original Doom's box art (above), it's all there, and it's fantastic.

Aside from callbacks, there are also a few hints at an unexpected narrative wrinkle: the android near the start of the trailer chuckles and observes that "you've returned", and the Doom Guy's armor appears to be enshrined in some kind of unholy altar. It's not much to go on, but if this is meant to be the original Doom Guy who somehow ends up back in a parallel dimension of the original game where he proceeds to kick ass all over again, I would be totally OK with that.

Bethesda and Id only recently started showing off Doom's single-player campaign, but it looks like it will be good for much more than a respite from the multiplayer mode. You'll be able to go wading knee-deep in the dead when Doom is released on May 13