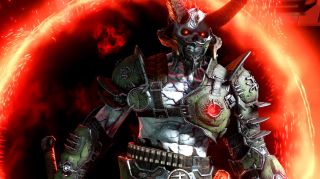 Doom Eternal is going bigger than its predecessor in every way: more demons, more ways to kill them, and more game to play. Our new hands-on preview convinced us that Doom Eternal is smarter and bloodier than Doom 2016, with action that ramps up into a surprisingly smart festival of mayhem, and it sounds like it could keep us knee-deep in the dead for much longer as well.

Creative director Hugo Martin confirmed that Doom Eternal "is a 22-plus hour game" in an interview with GameSpot. The average reported playtime for Doom 2016 on How Long To Beat is 11 and a half hours, meaning that Id Software is aiming to make Doom Eternal about twice as long as the first. Raw game length isn't worth much if the game feels padded or otherwise unnecessarily stretched out, but Martin said the studio is "hell-bent on engaging you from beginning to end."

The first two or three levels of Doom Eternal have more variety on display than the whole first game, Martin says, and it keeps building from there: "The fun is mastering it, because that power fantasy, you're going to earn that... the game is just going to let you put it on display. The third act of the game is just like, 'Okay, let's see how you do.' It's Bruce Lee walking into the dojo, just like, 'I'm going to wreck 30 dudes,' you know?'"

Even Doom 2016 was on the long-ish side for modern shooter campaigns. Eternal will go even further from the norm, and GR+'s own interview with Martin gave some hints about how it will keep players wanting more instead of just toxxing out on all the chaos.

"Every aspect of the game has depth, has meaning, and is smarter than you think it is," Martin told us. "You're surprised at how deep the different aspects of the game are. It's like on the outside, Oh yeah, Doom, it's junk food. But that doesn't mean it can't be loaded with nutritional content. Fun on the outside, smart on the inside."

Find more to look forward to in our guide to the upcoming games of 2020 and beyond.