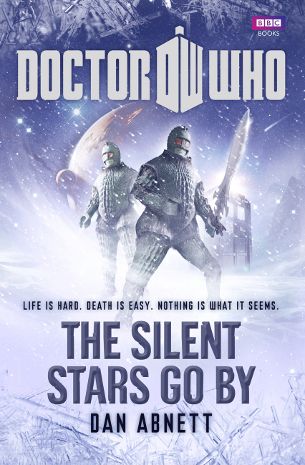 It's not quite Christmas, but this hardback Who has clearly been released with the stocking filler market in mind. From the snowbound setting to the carol-quoting title, it's a frosty, festive treat.

The TARDIS arrives on Hereafter, an Earth-like planet in the depths of winter. It's not long before the Doctor, Amy and Rory get mixed up with the gruff locals and, as is their wont, blamed for some recent disappearances. There's something nasty lurking in the woods - monstrous creatures with plans for the technology that ‘s keeping the human colony alive...

The cover gives the game away - the Ice Warriors are back, making a tardyarrival at the new Who party. Abnett restores the Martians to their barbarous roots, presenting them as silent, ominous figures that leave a trail of devastation in their wake. Instead of playing up their honour culture (as other Who books have done) he tells a spooky monster story that's big on atmosphere, if lacking in originality. The debt Silent Stars owes to a certain Patrick Troughton story is considerable.

It's an entertaining, easy-going read and Abnett gets the regulars dead on - though why Amy repeatedly refers to the monsters as “Ice Men” instead of Ice Warriors is perplexing. Still, it's hard not to be a little disappointed. Last year's Who hardback was by Michael Moorcock and every bit as mental as you'd expect. That's not to diss Abnett - his book is good. But, a slight bump in the page count aside, there's little to differentiate this from the regular, cheaper Who book line. Still, if trad Who with a modern flavour is your thing, you'll be happy to unwrap this on 25 December.