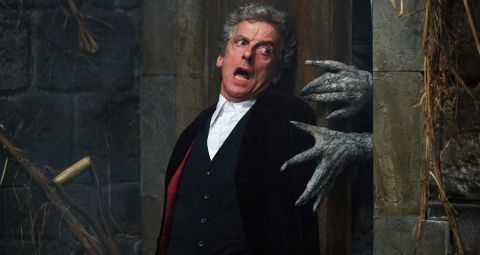 After 52 years you’d have thought there would be no format Doctor Who hadn’t made use of, but “Heaven Sent” proves there’s still virgin territory to be explored. It’s refreshingly unlike any episode we’ve seen before.

Tasked with carrying the entire weight of the story on his back, in what is (barring a few lines for Jenna Coleman) the solitary speaking role, Peter Capaldi gives a stunning performance as the Doctor: weary, frightened, affectingly grief-stricken and impressively indomitable. It’s a very risky strategy, but Steven Moffat pulls it off, with the use of TARDIS scenes as a way of dramatising the Time Lord’s thought processes working very well, providing some visual variety and ensuring that we don’t spend too much time watching our hero talking to thin air.

It’s a wonderfully surreal episode, with a fascinating central image: a medieval castle whose walls rotate like some architectural Rubik’s puzzle. The gradual explanation of the place’s purpose is well-handled, and it’s deeply satisfying that an answer was always available to us: the purpose of this “bespoke torture chamber” is to extract confessions, and the Doctor’s been carrying about a Time Lord “confessional dial” since the start of the season. Kudos to you if you put two and two together.

The Brothers Grimm tale the Doctor references is called “The Shepherd Boy”. You can read the full text here.

There’s been much debate about the scheduling of Who this year, given the deleterious effect that later-than-usual airings have had on the show’s ratings, but if ever there was an episode that deserves to be shown after 8.00pm, it’s this one. That’s not really a simple matter of scary imagery – though the Death-like figure which stalks the Doctor is bedwettingly creepy (somehow it’s the accompanying flies, and the rotting flesh they subtly suggest, which are the really nasty detail…) and provides some jolting jump scares. It’s more because the concept at the story’s heart is so oppressively dark. What we have here, presented for Saturday night family entertainment, is basically the sufferings of Hell. The Doctor spends billions of years being terrified by a horror from his childhood nightmares and dying painfully and horribly, over and over and over again. The scale of his suffering is absolutely mindboggling. For very young children the concept is probably too difficult to really apprehend. But for those kids who can... well, even for grown adults it’s a pretty haunting notion.

Niggles? Firstly, there’s the matter of that prophecy, previously discussed by Davros in “The Magician’s Apprentice”. The revelation that the Doctor is “the hybrid destined to conquer Gallifrey” forecast in ancient lore seems like a bit of a swizz, because in what sense is he a hybrid? He’s still 100% Time Lord. He’s just a very, very pissed off Time Lord! (Unless, that is, we're accepting the Paul McGann TV movie's assertion that the Doctor is actually half human...) Secondly, once you pause to consider some of the details of the Doctor’s “torture chamber”, they’re a little baffling. Why would the Doctor leave a clue for himself as cryptic as the word “BIRD”? Who carved the letters “I AM IN 12” on a flagstone and buried them deep in the garden? (Though hang on… could that not mean “I am in one too?” Maybe it’s a message from Clara…?!) And couldn't the Doctor whack that wall with a spade rather than punching it with his fist? Yeah, it'd look less dramatic, but it'd probably save him a few million years of excruciating pain!

Regardless, “Heaven Sent” stands as the best episode of the season so far: madly surreal, ingeniously baffling, immensely creepy and downright gruelling in its latter stages, with a tremendously impactful payoff – that final reveal of the citadel of Gallifrey is even more gobsmacking than the death of Clara. Whether it will repay repeat viewings is uncertain, as its secrets are a present you can only unwrap once. But on a first watch, it’s simply breathtaking.

The Veil was played by Jami Reid-Quarrell, who was previously Colony Sarff in "The Magician's Apprentice"/"The Witch's Familiar".

Hmm, rotating architecture? Could Steven Moffat possibly have been inspired by the poster for Joss Whedon’s The Cabin In The Woods?

Why “Heaven Sent”, when the episode’s all about the Doctor being sent to his personal hell? “Hell Bent” makes perfect sense for episode 12, though – next week we can surely expect to see a Doctor damaged by his experiences, and hell-bent on revenge.

The Doctor: “I’ve finally run out of corridor… there’s a life summed up.”