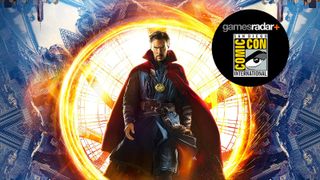 The second trailer for Doctor Strange dropped online over the weekend shortly after premiering at San Diego Comic Con, and it gave us a satisfying peek at the world-bending visuals that promise to make the film a unique entry in the Marvel Cinematic Universe. Indeed, the introduction of magic means that things will be getting a little weirder in the MCU, not least because Doctor Strange will be exploring multiple universes.

"This is the movie where Marvel goes full weird", director Scott Derrickson told ComicBook.com. "What the comics did was, they brought with Doctor Strange an extra dimension into psychadelia, mysticism, and spirituality and all these very 60’s things and broke open the Marvel comic book universe into the Marvel multiverse. I think Doctor Strange is going to be the beginning of the Marvel Cinematic Multiverse. It’s really serving the same function that the comic did. Even though it was a weird aberration as a comic book, I think it was a real linchpin in the comics. It ended up being decades of new stories and I think this movie will do the same thing".

This is really great to hear; For all its Gods and supermen, the MCU has been pretty grounded in reality thus far. It makes sense that upcoming movies will explore the cosmic side of the universe as we get closer to Infinity War, and that all starts with Doctor Strange. Just how far out there the film chooses to go will be very interesting to see.