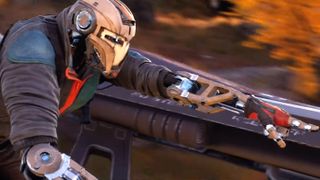 Disintegration, the game of tactical hoverbike combat directed by one of the co-creators of Halo, will host its first round of beta tests soon. Considering the unique approach that Disintegration is taking to first-person combat - giving players small squads to command in battle as they directly engage enemies with the weapons on their gravcycles - it should be a handy way to see how well you like it ahead of time.

The Disintegration beta will start with two days of closed testing on January 28 and 29. Head to the game's official site and register ASAP if you want to participate in those. Then an open beta test will follow shortly after on January 31 and February 1.

Both halves of the beta will include access to two multiplayer game modes (Disintegration will have three at launch): Retrieval, which gives one team a payload to deliver through hostile territory defended by the other team; and Control, which sets both teams in competition to capture and hold points across the map. Seven of Disintegration's crews will be available to take into battle, each with their own themes and special abilities.

What you won't get to play is any of Disintegration's single-player campaign. It's for the best, I'm already weirdly invested in its story of mechanical people fighting to reclaim their human bodies from a near-future authoritarian regime and I'd hate for there to be spoilers. What can I say, I love snarky cyborgs. The full launch of Disintegration is still set to come later this year, so hopefully I won't have to wait too much longer after the beta to become best friends with all the robo-folks.