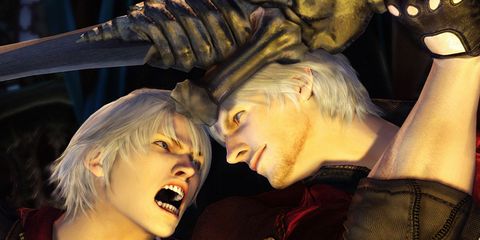 Devil May Cry might have redefined action gaming when it first stomped onto the PS2 in 2001, but since then the slashy-shooty series has fallen into semi-obscurity. Devil May Cry 2's unexpected crappiness cost the franchise some of its following, and although Devil May Cry 3 was mostly excellent, its crushing difficulty all but relegated it to hardcore niche status. It's now been three years since the last time we saw sword-swinging, gun-slinging demon hunter Dante, and if he's going to bring the fans back, he's going to have to do something special.

"Something special" in this case means stepping out of the spotlight and letting someone else take over for a little while. As you're probably already aware, the real star of Devil May Cry 4 is Nero, a smarmy little hipster who looks suspiciously like a younger version of Dante. Nero belongs to the Order of the Sword, a cult that worships Dante's demonic father as a god, and as the game begins he's running late for a sermon by its high priest - and more importantly, a hauntingly pretty aria sung by his love interest, Kyrie.

It doesn't take long for everything to go to hell, of course. But what's surprising is that it's Dante himself who sends it there, crashing through the cathedral's roof and delivering a bullet to the priest's forehead. You'll find out soon enough why he's acting all evil, but in the meantime, it's Nero's job to hunt him down, beginning with an explosive duel that leaves the cathedral a flaming wreck.

From there, the action is everything fans have come to expect from Devil May Cry, as Nero slashes and shoots his way through the hordes of demons infesting a city, an old mining site, a couple of castles and a dense jungle. The game still relies heavily on those slightly irritating sequences in which spectral barriers lock you in a room until you've killed a few waves of enemies, but these go by so quickly that they're only ever a minor frustration.

Besides, the combat itself is a lot of fun. It's worth noting here that the game's difficulty is nowhere near as ridiculous as DMC3's; if anything, it's too easy. If you still find yourself frustrated, though, you can simplify things by switching to an automatic combo system, or using three automated level-up paths instead of manually picking out improvements for Nero and Dante. The carnage here is the best and most over-the-top the series has pulled off to date, and whether you're playing as Nero or Dante (which you will for the last 40 percent of the game), each brings something new and cool to the table.

Nero, for his part, is in many ways the more fun character; whereas Dante tends to brute-force his way through every situation, Nero's a little more reliant on finding cool items, solving puzzles and busting out skillful sword combos to get ahead. He's also got something Dante's never had: the Devil Bringer, a giant, upgradeable spectral fist that can yank enemies toward him (or, if they're bigger than he is, to yank him over to them, which comes in handy during boss fights). He can also use it as an attack, which produces different results depending on the enemy; some simply get slammed to the ground, while others get swung around like ragdolls or stabbed with their own weapons.

Dante, meanwhile, plays a lot like he did in DMC3. He's a little tougher than Nero, and can switch between four upgradeable "fighting styles" (really just special moves) with the touch of a button. And while he doesn't have the Devil Bringer, he gets something just as good: utterly insane weapons that you'll earn by defeating bosses, all of which are good, hyperdestructive fun.

In addition to Dante's default sword, there's Gilgamesh, a suit of armor that enables him to bust out powerful martial-arts moves, and Lucifer, which tosses out glowing red spikes that stay stuck in enemies and can be exploded at will. And while Dante comes ready for action with a sawed-off shotgun and paired .45s, they're weak and piddly compared to Pandora, an attaché case that can turn into several varieties of superweapon (RPG, missile launcher, heavy machinegun, laser and Raiders of the Ark-style kill-everything briefcase) if you can input the right button codes.