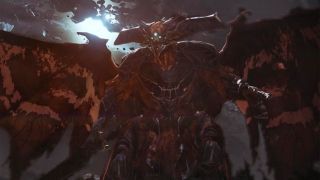 You know those sing-along songs you sometimes see at karaoke bars and kids' parties? The ones with the bouncing icon and light up lyrics? Well, Destiny developer Bungie has created a "raid-along," replacing bouncing icons with alien monsters and lyrics with the sweet songs of gunfire. It's also a play on the studio's usual "ride-alongs," but I like my explanation better.

The studio brought in its best players, as well as raid designer Brendan Thorne, writer Jill Scharr, and community manager David Dague (better known as DeeJ) together for a livestream of the King's Fall raid today, giving live commentary as the team progressed through the Dreadnaught. Whether you've beaten King's Fall a hundred times or have yet to set foot within the Taken King's lair, it's worth a watch:

With so much of Destiny's lore and story hidden behind the scenes, I particularly enjoyed Scharr's contributions to the raid-along. Maybe you preferred to pick apart the level and encounter design like Thorne? Or maybe it's just nice to revisit a familiar place with a new twist.

And who knows? Maybe we'll see this team again when Destiny gets an official LFG tool. And then we can have Raid Along 2: Raid Harder.