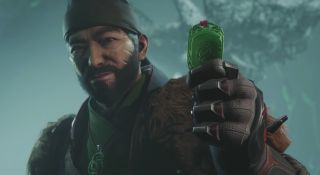 Destiny 2's latest update made sweeping changes to supers, multiple weapon archetypes, and one of the game's oldest power problems. With all that out of the way, Bungie's set its sights on Destiny 2's underwhelming clan system, which, per today's This Week At Bungie blog post, is getting a major overhaul in the Season of the Drifter.

"We’ve received a ton of feedback from the community that the Forsaken changes affected smaller and less hardcore clans less positively," said design lead Steve Dolan and senior designer Mark Uyeda. "These clans feel like they can no longer hit the levels they had in the past. We also heard that there is just too much emphasis on doing daily bounties. As a result of this feedback, we took some of the clan progression mechanics back to the workbench and made changes to improve the experience."

In March, Destiny 2's clan XP system will be reverted to how it was when the game launched. Daily clan bounties will be removed, and instead players will earn clan XP simply by completing activities like Strikes, public events, or basically anything else. Three weekly clan bounties which require clanmates to play together will remain, with one PvE, PvP, and raid bounty available each week. These bounties will award Legendary gear and clan XP, and tie into the new clan reward system. At clan rank three, weekly bounties will award mod components; at rank four, they'll also reward enhancement cores; and at rank six, your clan will unlock a fourth weekly bounty with an unspecified objective.

It's unclear if these weekly bounties will award powerful gear, and Bungie has yet to confirm what the new weekly clan XP cap will be. That said, this system sounds like a sizable step up from the current one - which, as Dolan and Uyeda said, is absolutely anchored to daily bounties.

In the same update, Bungie quietly confirmed that more Exotic catalysts - something players have been requesting for months - will be added in the Season of the Drifter. Regarding the clan perk that buffs Crucible and Strike catalyst drop rates, the studio said:

"If you already have them all (lucky you), we plan to release a few more from our Year 1 reserve during Season of the Drifter for you to chase. They won’t be released day one of Season 6, but keep your eyes on the patch notes for availability."

Note that, as a follow-up to this week's power update, excess Ethereal Keys (over the cap of five) and Iron Banner bounties will be removed from player inventories at the start of the next season. So if you're holding onto any, cash them in soon.

Read up on everything coming in Destiny 2 Season of the Drifter in our roundup.