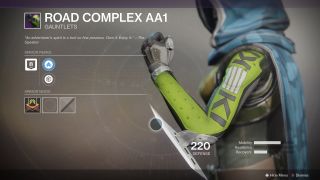 Update 2: In its latest This Week at Bungie post, the developer maintained that Road Complex AA1's resemblance to the Kekistan Flag was made without any malicious intent: the post cited "simple mirrored chevron shapes" and other pieces of innocuous reference material when the design was conceived back in 2015. Bungie did say that the armor was flagged before launch for having the word "kek" in it, but was approved since it was thought to be in reference to the original World of Warcraft meme. Bungie said that "the more contemporary, vile derivation that has been repurposed by hate groups" was not caught by this vetting procses.

Update: Bungie has clarified that it will not be removing the armor entirely, so nobody is losing their loot. The gauntlet's visuals have been changed, and the original artwork will be removed via patch by next week:

This imagery has been removed from the shared game world. It will be removed from inspections and icons in a HotFix planned for next week. https://t.co/Mom6ZGiSMaSeptember 12, 2017

Original story: Bungie will be ditching a piece of armor from Destiny 2 after it was pointed out the visual similarity it has with an alt-right flag. The company announced the offending item's removal on Twitter, saying that the armor "shares elements with a hate symbol," that said similarity was not intentional, and that it does not represent company values.

2/2 Our deepest apologies. This does NOT represent our values, and we are working quickly to correct this. We renounce hate in all forms.September 12, 2017

At Bungie, our company values place the highest emphasis on inclusion of all people and respect for all who work with us or play our games. https://t.co/lox0XuYhgJSeptember 12, 2017

The armor in question seems to be a pair of gauntlets called the Road Complex AA1, which you can see below:

Tilt your head or the image ever so slightly and instead of lines and arrows, you'll see the word "kek." While the origins for this are harmless - it's what an Alliance player sees when a Horde player types "lol" in World of Warcraft, which was itself inspired by the phonetic pronunciation of "lol" in Korean - it now represents (or can represent) a group known as the alt-right.

From a simple translation, the word has changed to be recognized as the god of the movement, representing disorder and chaos - two things that proponents of the alt-right value as a way of disrupting a culture they see as too politically correct and tolerant - as well as the root of a fictional nation called Kekistan. Here, you can see a photo of someone wearing the Kekistan flag:

See the resemblance? The black-white-green color scheme and font are nearly identical, so it seems like a pretty clear reference.

What makes the alt-right a hate group as opposed to a gathering of individuals expressing unpopular opinions? The specifics vary, but mostly the alt-right is defined by what they are against: the movement aims (by its own admission) not just to denounce non-whites, Jews, Muslims, and other groups, but to subjugate them and establish white supremacy, an outcome they view as right and just. The Kekistan flag itself is based on the Nazi war flag.

They also oppose intermixing of cultures and feminism, asserting white males as the rightful dominant force of the world, relegating females to the roles of wives and mothers and people of color to a labor force. The group uses mass posting of memes (aka: shitposting) to spread its message. Some of its members have said they only participate to get a rise out of the easily-offended, while others wholeheartedly embrace its messages of white supremacy.

Regardless, it's pretty much the opposite of a company that, on its "About" page, says "We create worlds that inspire friendship." As for what will happen to the gauntlets, Bungie hasn't elaborated. They're fairly high quality, and obviously some players are wearing them right now. If Bungie simply removes the gauntlets entirely, those players will probably feel cheated - more likely they'll be reskinned or replaced by a new model.