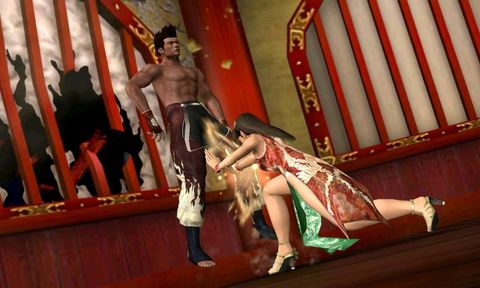 Dead or Alive has always been the gaudy savant of the fighting game genre. Flashier and less technical than Street Fighter, but not as absurd or button-mashy as Soul Calibur, it's easy to pick up and hard to put down. Unfortunately, thanks to some less than subtle commercials and spinoffs, it’s mostly known as the bouncy boob game nowadays. Maybe it’s just the smaller screen or Soul Calibur’s latest lascivious ladies, but this side of DOA has been agreeably toned down.

Sure, there’s still a pervy model viewer and some titanic tatas, but that’s standard fighter-fare and is hardly the selling point. Instead, the emphasis is placed on the fundamentals (oh right, this is a fighting game!). The fighting mechanic roughly amounts to a rock/paper/scissors game - punches beat throws, throws beat counters, counters beat punches – but then there’s the fourth element: the ability to completely mind-fudge your opponent. There are plenty of ways to do this, from slight delays in your combos to stopping a combo midway and grabbing the opponent.

It’s all delightfully explained in the story mode, called Chronicles, which serves as both tutorial and campaign, and takes you through the past four DOA games. While you progress through the story, the bottom screen will pop up with key information like those old VH1’s Pop Up Videos, which explain everything from the definition of “Conglomerates” to how to perform a Critical hit. Not that you’ll need to know any of it; the story boils down to boy ninjas inexplicably slapping girl ninjas and anyone could effectively button mash their way through the campaign.

See, DOA Dimensions is quite a bit easier than its sometimes-brutal console counterpart. We beat the entire (fairly long) story without ever losing a round, and beat 50 characters in Survival Mode on our first try. The bottom screen displays complex combos, which can be tapped to be performed. We don’t mind DOA being more accessible, but a beginner pulling off master-level moves online seems cheap.

Still, our largest gripe isn’t getting beat down by tap-a-combos online, but instead how diagonal hits are nearly impossible to pull of with the 3DS’s circle pad. In a game that requires this much precision, it’s a shame we have to resort to the d-pad to get the accuracy the circle pad should ensure. And that screen lag that everyone’s been harping on? We played through the entire campaign and plenty of online matches without frustration, though some people will still take the framerate over the 3D.

DOA looks gorgeous either way. The graphics are some of the best we’ve seen on any handheld and we were consistently impressed with the gorgeous settings. Every level has interactive environments, ranging from explosive generators to fragile balconies that lead to new areas of the stage. The environmental damage looks great and serves as a huge game changer – kicking someone off a ledge can cut their health bar in half. That shit would never fly in Street Fighter.

But this game is so different than Street Fighter it’s a wonder their protagonists could even share the name “Ryu.” If you’re looking for a crazy methodical fighter on 3DS, then look elsewhere (for instance, Super Street fighter IV). DOA, meanwhile, is at its best in Dimensions - flawlessly straddling the line between technical and enjoyable, button mashing and clever combos. Some people might be turned off by its ease of entry, but the spectacular online play, neat little fight-a-friend Street Pass feature, and 26-character roster is enough to turn the rest of us on.

Wait. That came out wrong.