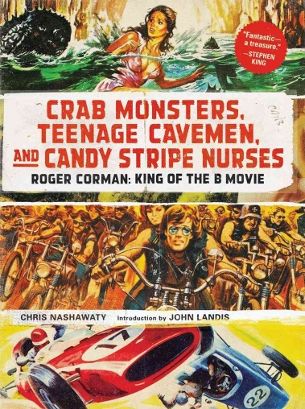 Books on cult cinema can be visual extravaganzas, bursting with eye-popping artwork. Or they can be more dense, text-heavy affairs which take you behind the scenes. The great thing about this overview of the output of Roger Corman, King Of The B Movie, is that it’s both.

On the one hand, it’s the perfect thing to adorn your coffee table, brimming as it is with gloriously lurid poster art for films like Attack Of The Crab Monsters and Queen Of Blood , as well as lobby cards and stills.

But it’s also a thoroughly satisfying survey of Corman’s ouevre. His career as a director (most notably on the Edgar Allan Poe cycle of the late ‘60s) and producer (kick-starting the careers of the likes of Joe Dante and Francis Ford Coppola) is already well documented, with books like How I Made A Hundred Movies In Hollywood And Never Lost A Dime , and even a documentary, 2011’s sterling Corman's World: Exploits of a Hollywood Rebel .

But Entertainment Weekly writer Chris Nashawaty’s take on it all still feels fresh. A supremely readable and impressively star-studded oral history, pieced together from interviews with a staggering 64 collaborators, it sees everyone from Jack Nicholson and Sylvester Stallone to Martin Scorsese and James Cameron lining up to pay affectionate tribute. Along the way, there are many entertaining anecdotes, from Corman dropping LSD for research purposes (before making The Trip ) to William Shatner having gaffa tape on his groin (during the filming of Big Bad Mama ).

The book also makes a case for Corman as one of Hollywood’s progressives, pointing out that he was unusually liable to hire women. Mind you, even there it admits that this might have been because the penny-pinching producer could get away with paying them less... Throughout the book, we’re regaled with tales of Corman’s near-legendary parsimoniousness (this is a man who used to save unfranked stamps for reuse). Good job all the garlands thrown at his feet here are metaphorical; otherwise, Corman would be aghast at the thought of the florists’ bills.