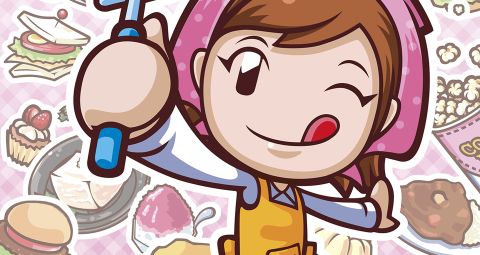 Cooking Mama dishes up more of the same as its predecessors: good-looking but boring to play, with a side-order of kid-friendly minigames and a not-quite-tantalising prospect of a high score.

I’ve had my fair share of cooking disasters. Trying to deep-fry bacon while drunk enough that my gin-perfumed breath could probably have powered a small car. Trying to boil pasta without any water. Using salt instead of sugar, sugar instead of flour, and thousands upon thousands of bees instead of butter. My bad, read the recipe wrong. But even cooking idiots can find a home in Cooking Mama.

Mama ain’t no Gordon Ramsay. She simplifies cooking down into bite-sized chunks of minigame: chop the onion! Fry the beef! Gut the fish! Wait, gut the fish? Yes. Gut the fish. Cooking Mama ain’t mean, but that doesn’t mean she’s squeamish. Get your gutting gloves on.

When you’ve finished her step-by-step task, she congratulates you - for doing it within the time limit, and for not messing up too much. If you are a colossal kitchen moron, she’ll just tell you that you’ll do better next time. Sure, it sounds a little bit like she’s saying it through gritted teeth, but what are mamas for if not thinly disguised passive aggression?

The minigames themselves are mostly cribbed straight from previous Cooking Mama games, with egg-cracking, rhythm-based cooking, and ingredient-matching popping up frequently enough that you could probably do it with your eyes closed and your stylus in your mouth. It does, of course, get very repetitive, because there aren’t too many ways to cut an onion.

You can win any game, so you can win Cooking Mama, too. It’s not the result of getting a gold medal on every single recipe, although that’s an achievement in itself. The actual completion of the game doesn’t happen until you unlock Mama’s Secret Recipe: a Spaghetti Bolognese made with human flesh. Don’t ask us about it, we’ve never even come close to finding it… but we’re definitely sure it exists. Definitely. I mean, just look at her. She’s totally a cannibal.

Although there’s normally at least one unique minigame in each recipe, it does start to feel less like a game and more like the bit at the end of a long Monday where you drag your exhausted carcass into a dim kitchen to reheat yesterday’s baked beans like the tech-enabled caveman you are.

If you find the repeated onion-cutting makes you weep, spare a thought for the talented game designers who had to create the minigames in which you do the incredibly mundane, like a timed quest to find room in the fridge by moving around various mysterious bottles. Still, Mama’s impressed nonetheless, as she chirrups away in the background, hearts and sparkles spewing forth from her like a twee rewrite of The Exorcist jointly directed by Wes Anderson, and a horde of teenage girls armed with stickers and Instagram filters.

Worse than the mundane is the downright bizarre, where Mama requests that you do something that seems normal at first, but is soon revealed to be some kind of food-based circus. “Put the fruit on a plate,” Mama implores. “I would, Mama,” I scream at the unflinchingly peppy mascot, “but the disembodied hands holding said plate are flailing around the screen for no good reason.”

Obviously the solution is to fling the fruit at the plate and hope that it lands in some kind of pleasant serving arrangement rather than falling to the floor, where we can only hope that Cleaning Mama deals with it, but what kind of lesson is this teaching the young audience? Listen, kids: if you ever end up working in a restaurant, treating the food like some kind of fairground game will end up about as well as wiping your bare arse on the cutlery - which, coincidentally, is one of the later minigames.

Though every minigame is timed, you will very rarely fail to beat the time limit, unless the minigame is poorly explained or there’s a particularly compelling episode of Doctor Who on the TV. Failure states are mostly stumbled upon through poor performance, but it’s often hard to know which of the minigames are a straight fail and which allow you to try again within the time limit. Much of the time, I managed to incur the wrath of Mama by being terrible at draining various kinds of bean, which involves tipping a bowl really, really slowly over a sink. Just. Get. A. Sieve.

When you tire of cooking, firstly ask yourself why you bought a game about cooking, and secondly direct yourself to the other challenges found on the main start screen: divided into Help Mama, Help in the Shop, Help Harvest, and Let’s Study. There’s a clear focus on teaching kids basic number skills, spelling, and the most fun game of all, chores. They’re the same kind of minigames as the cooking ones, but with more of an agenda to make children into the perfect obedient androids we all deserve.

Okay, so you know the bit at the start, where I made it sound like I was a kitchen disaster? I’m not really. I have done most of those things, because that’s what cooking is about - screwing up a lot and making people eat your stuff anyway. I love cooking, I do, and there’s something about Cooking Mama I love too. Maybe it’s the surprisingly detailed animations, the impressively realistic physics, or the pretty accurate recipes - I will admit I find myself getting fairly hungry when playing. Cooking Mama is intensely silly, repetitive to the point of boredom and way, way too generous with its time limit, but it does look bloody great.

Cooking Mama dishes up more of the same as its predecessors: good-looking but boring to play, with a side-order of kid-friendly minigames and a not-quite-tantalising prospect of a high score.

Kate Gray
Kate writes about video games, tweets about nice things and takes lots of photos of food. You can find her writing on The Guardian, Vice, Buzzfeed and a bunch of other lovely places.
See comments
Gaming deals, prizes and latest news