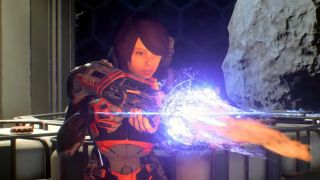 Mass Effect: Andromeda's multiplayer mode will launch with five maps. If that sounds a little thin to you, c'mon - there's a whole single-player game there too! Also, BioWare has confirmed that all of Andromeda's DLC maps will be free, so you won't be stuck with that selection for long.

But before we start wishing for more, let's get to know the sites for our early battles.

"An outpost built into an asteroid." Please tell me you can open up the airlocks and suck uncooperative teammates out into the vacuum of space.

"A refueling station on a frozen, ice-covered planet." Those industrial walkways should be sniper friendly.

"A foundry set on a cooling river of lava." I think they might have run out of time coming up with names for these maps.

"A vacated, Milky-Way-species outpost, set in a sprawling desert." Plenty of wide-open skies to use that jetpack!

You can watch the full official multiplayer gameplay walkthrough video from BioWare if you want to learn more about how the new-and-improved co-op mode works. Or read up on Strike Teams if you'd rather reap a bunch of the same rewards without ever leaving the single-player campaign.