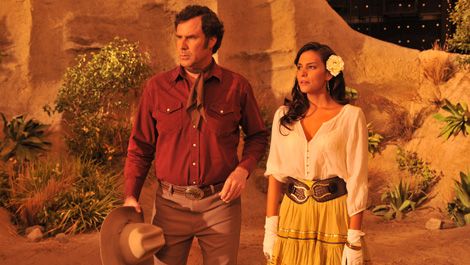 Non-stop satire of Mexican melodramas assembled by Funny Or Die bright sparks? It sounds like a recipe for insufferable smugness. But Casa De Mi Padre escapes that fate, being a joyous, ramshackle celebration of sloppy filmmaking and cheapo production design.

One of its best jokes is casting six-foot Will Ferrell as Armando Alvarez, the dim-witted progeny of a south-of-the-border rancher clan. The actor rains down buffoonish chuckles by the simple act of vocalising his entire role in Spanish – a language he can’t actually speak.

Coming in for equal ribbing is the genre’s arch theatricality, with crash- zoom close-ups, abrupt musical numbers, protracted death scenes and a love scene made up entirely of bare-bum shots.

The plot may be a mere springboard for the absurdism, but still smuggles in a splash of social critique (americans addicts are “shit-eating crazy monster babies”) and topicality, as the Alvarezes’ land becomes a killing ground for drug lord Onza (Gael Garcia Bernal).

Everyone’s in on the joke (including Diego Luna, as favourite Alvarez son Raul), with Ferrell at his most likeable, bringing sincerity to the onslaught of idiocy.

Veterans of sketch comedy, director Matt Piedmont and scripter Andrew Steele keep the laughs flowing (albeit with several damp squibs along the way).

Knowing a premise this wafer-thin will swiftly reach cracking point, they call a halt at 85 mins – meaning viewers get to leave wearing a big grin rather than a pained grimace.