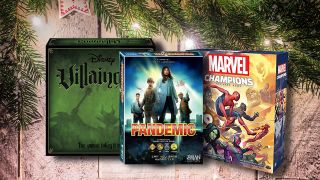 You're here because you love board games, and you especially love cheap board games. We're here because Boxing Day and After-Christmas sales are a great chance to get your hands on some cheap board game deals. Yup, even a bunch of this year's best board games could get a price cut during this time of year, as all the retailers try to enjoy some extra end of year sales. They're trying to get your attention (and your cash), so there may even be competition amongst them to offer you the best deals. So keep your eyes open for deals that will appear from now until the New Year.

Best card games
Want something a little different? Try these awesome card games out for size.

And our extra-helfpul deal software is always searching for the latest reductions, so make sure to come back here every now and again to see if a new treasure has appeared.

There's a reason Pandemic tops so many 'best of' lists: it's a stone-cold classic and one of the best cooperative board games out there. Pitting you and up to three other players against a clutch of diseases, you'll need good teamwork and strategy to stop the world from being overwhelmed. Because it's such a replayable game, there's every chance you'll still be playing by this time next year. For more, find out why you should play the Pandemic board game.

OK, so I get that this may seem a bit dry. However, make no mistake, Ticket to Ride is one of the most accessible and fun board games on shelves right now. It's easy to get your head around; your task is to build train routes across the country, thereby earning you points. Whoever finishes with the highest score wins. What's more, it's a family-friendly game with an undercurrent of deep strategy.

Disney has always told us that good triumphs and evil loses, but what if it didn't? And wouldn't that be fun? This is the thinking behind Disney Villainous, a devious board game that gives you control of famous baddies in their quest for power. It's a superb strategy game with great production values, and I can't recommend it enough for fans of all things Disney (or those still waiting for a Disney Plus sign-up in their country, for that matter). For more, here's why you should play the Disney Villainous board game and Disney Villainous expansions.

Trivia games are always a winner over the holiday season and Blockbuster is among the best we tried during 2019. Although it's wrapped in nostalgia for the 1990s store, you don't need to know anything about it to enjoy this one; it's a that blends charades with head-to-head questioning (find out how in our guide to why you should play Blockbuster: The Game). A must-have.

It may have come out way back in the 1970s, but Jaws still messes us up. Luckily, this board game adaptation is a lot more fun than being menaced by a giant rubber shark. A cooperative game that pits some players against another that controls the underwater monster, they've got to balance saving civilians with stopping the shark itself. Meanwhile, the shark has to eat as many people as possible. Find out more in our feature on why you should play the Jaws board game.

A game of dice that's wrapped in a concept that as fun as it is goofy, King of Tokyo casts you as a stereotypical monster trying to gain points through stomping around the city. Unfortunately, those attempting to smash up Tokyo can't heal from their wounds, so you've got to balance winning points with keeping your monster alive. It's a great choice for all ages.

Despite arriving late in 2019, Marvel Champions: The Card Game has already given us a lot of reason to fall in love with it. You'll join forces with up to three other players as a classic Marvel superhero like Spider-Man or She-Hulk, and you've got to stop villains such as Ultron with a mix of card effects, allies, and tactical savvy before they complete their nefarious plan. Get the full report on why you should play Marvel Champions: The Card Game right here.

Bad news, friends - one of you is a werewolf, and there isn't much time to uncover who it is. A souped-up version of wink murder, this excellent party game can be played and finished in around ten minutes. Ideal for New Year parties or family get-togethers, in other words.