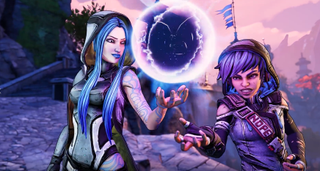 As consoles become more and more like PCs -  that is, increasingly powerful and with multiple versions available - once PC-only optimization settings are becoming more common. As Gearbox online and social producer owner Scott Velasquez explained in a new PlayStation Blog post, Borderlands 3 is the latest game to offer PC-like graphics options - at least on PS4 Pro.

"The PS4 is an amazing console, but the PS4 Pro takes things to another level and allows us to push the game further by running at higher resolutions and higher framerates," Velasquez said, adding that Borderlands 3 will support 4K and HDR output on PS4 Pro as well. More pertinently, PS4 Pro owners will be able to choose between better visuals or a better frame rate.

"Players will be able to choose between 'favor resolution' and 'favor performance' on the PS4 Pro through a new setting called Graphics Preference," he explained. "When 'favor resolution' is selected, we aim for the highest resolution possible, capping framerate at 30 frames per second. In 'favor performance' mode, we increase the framerate cap to 60 frames per second and render at 1080P."

Notably, even when rendering at 1080p, the game will still look sharper than usual thanks to the PS4 Pro's supersampling. Favoring performance and playing at 60 FPS also has the added benefit of giving you more of a buffer against frame drops - dipping from 30 to 24 is much more noticeable than going from 60 to 54 - so I reckon it'll become the go-to way to play for many people, especially in multiplayer where the screen is more cluttered.

Velasquez only discussed the options available on PS4 Pro - this is a PlayStation Blog post we're talking about here - but this feature will likely be available on Xbox One X as well. It's considerably more powerful than the PS4 Pro, so it's surely capable of it. In any case, it's nice to see console games giving players more options as the variety of systems and screens increases.