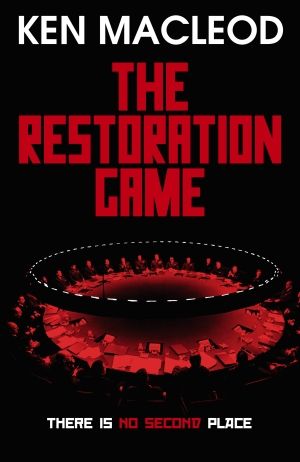 Considering that a stock justification for science fiction’s very existence is that it helps illuminate our own contemporary lives, near-future and day-after-tomorrow SF has enjoyed a comparatively low profile of late. Perhaps the years ahead look too threatening, too uncertain to deal with?

Well, it’s an argument. And yet it was ever thus. Imagine if this review had been written in 1950 or 1960, when nuclear apocalypse seemed all too plausible. Or how about 1940? There’s never been that much convincing near-future SF around for a simple reason: it’s bloody hard to write.

And yet don’t SF writers have a duty to grapple with the world just beyond the horizon, at least part of the time? If so, one man who can’t be accused of not putting in a shift is Ken MacLeod. Issues like terrorism and global warming haunt the pages of his recent novels. Here he shows no signs of heading back to explore space, except insofar as the novel opens on Mars. Indeed, he goes back in time in that, incorporating the dispute that broke out between Georgia and Russia over South Ossetia while he was writing. Events here are actually set in 2008 – day-before-today SF, anyone? The Red Planet ploy is a way for MacLeod to set up one of his central themes, the idea that life is but a dream, a notion that’s worried philosophical talents like Descartes and, well, the Wachowskis down the years.

If setting The Restoration Game ’s action in a virtual world seems like a cop-out, nothing could be further from the truth. Rather, it’s consistent with the sense of displacement, the idea that nothing is quite as it seems, that runs through the novel. This notion of a world lurching in and out of focus is particularly acute for the heroine, Lucy Stone, a young woman who’s never quite sure where she belongs. Born in Krassnia, once part of the USSR, she’s the daughter of a CIA spook. Stone doesn’t know who her father is, but when we meet her she’s at least found a semblance of stability working for a videogame company. This hiatus ends when her mother calls. Could Stone’s employers, currently at work on an RPG, tweak their creation to encompass Krassnian mythology? Money will change hands if they can. Gradually, she’s pulled into a game of espionage that riffs off recent history in the South Caucasus.

This is the territory of an airport thriller, as is Stone’s journey back to her homeland in search of a long-kept secret, but that’s largely the point, because it enables MacLeod to introduce a jarring moment that shocks you out of the familiar, when Stone comes across computer code carved in Latin. MacLeod fans will recognise this pushing of his überdisruption button as a trick the author also pulled with The Execution Channel , but it doesn’t much matter. What’s more important is that MacLeod, as with his previous novel, is again exploring the idea that our near future may turn out to be far more bizarre than we suspect.

Maybe there’s also a wider lesson here. You don’t need to change everything to make our current reality appear exotic. Whether other writers can duplicate this trick while also aping MacLeod’s mix of sly humour, deftly drawn characters and intricate plotting is, of course, entirely another matter – this is a writer at the peak of his powers.