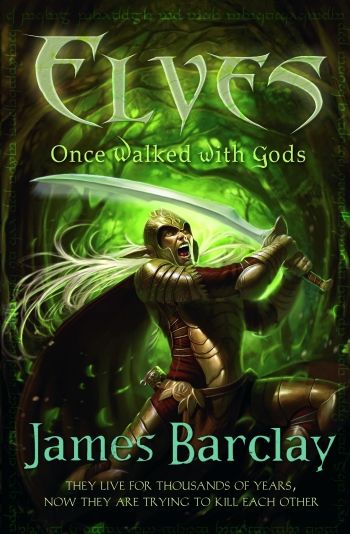 James Barclay returns to the world of Balaia with the first in a new series concerning his Elves. Barclay’s extra-dimensional refugees aren’t the usual pointy-ears, they’re caste-ridden, unmagical creatures whose savage ancestry lurks just underneath their civilised exteriors. Barclay’s original approach so buckles the archetype’s trammels that his Elves might as well be called something else, but such are the strictures of modern genre fiction. “Elf” is such a handy label for publishers, you wonder if Michael Moorcock could get away with calling Elric’s people Melnibonéans these days.

None of which detracts from Barclay’s book - Once Walked With Gods is a ripping fantasy yarn. A coup by the Ynissul, the longest-lived Elves, to return themselves to the top of the pecking order goes woefully wrong when they are betrayed by their human mercenaries, who set about a program of genocide. The Elves, still reeling from the loss of their original home ten years earlier, are few in number and have no army. Only the elite TaiGeneth, Elf super-ninjas, stand in the way of utter ruination for the race, and there are only 90 of them. Perhaps disgraced hero Takaar can help - but he’s gone missing, and gone nuts, so perhaps not…

Massive conspiracy has become high fantasy’s second-favourite top trope for (all-out war remaining the all-out favourite). Barclay’s is a little hard to swallow, but once the story gets going, we’re treated to a welter of pulse-pounding action. The endless descriptions of Elven-war acrobatics manage to avoid becoming dull, and although it is sometimes hard to keep track of the numerous characters amidst the magical explosions, Barclay makes us feel the loss of each and every one. It’s an Elf action movie on paper.