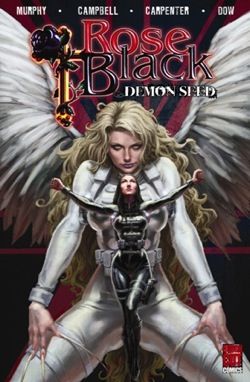 I love heavy metal. I’m not just talking about the sort of full bore walls of noise you get from Slipknot either I’m talking full on, old school, still see the rivets in it AC/DC, or Cream or Bon Jovi. Because let’s face it, no less an authority than Dean Winchester has confirmed that Bon Jovi does rock, on occasion.

Superficially, Black Rose: Demon Seed , is very much a heavy metal kind of comic. The second volume in a series about a female vampire, it looks, at first, like it’s going to be nothing but skin tight bodysuits and punching. Which is great fun in and of itself, hell I’ve seen every Resident Evil movie and I’ll watch them all again too, but it implies that you’re going to get something which is predictable, even safe. Entertainment you already know the geography of, if you like.

That’s the genius of it, the sucker punch that Ed Murphy and Tom Campbell’s script has chambered from the moment you open the front cover. Yes, this is a book about a female vampire turned spy; yes the two main characters are both wearing skintight bodysuits; and yes it does culminate in a full on Vampire/REDACTED throwdown. But all of that revolves around two massively clever, refreshing concepts and the end result is a hugely entertaining book.

The first one of those concepts is Rose herself. A high-functioning vampire, Rose is particularly fascinating because she can literally see the web of creation around her. She’s openly Christian (it’s not remotely evangelical if you’re worried about that), and her faith is powered by, unusually, what she can see as well as what she believes. Rose can see how we’re all children of the Son Of Man: actually sense the genetic connections between us. That interconnectedness helps her believe, and that belief, in turn, ties into her patriotism and work with British Intelligence.

It’s an unusually nuanced set of motivations for a character and Murphy and Campbell unpack it with real subtlety. They also use it to emphasise exactly how wrong Eloise, the villain of the book, is. Without giving anything away, Eloise is a fascinating character, equal parts tragic and monstrous and the way she’s dealt with, and designed, feels like something very different to the traditional action horror story. Eloise is a tragic character who’s somehow still monstrous, and whose future is nothing but horror. There’s some really surprising, well-handled stuff here dealing with the physical version of evil itself that plays like the best John Carpenter horror movies and the book is at its best when this concept is explored and worked with. Eloise, and the true nature of what she is, is the other high concept element of the book and she and Rose circle each other warily for most of the story, ideologically and physically opposed, and waiting for the inevitable duel.

Joel Carpenter’s art impresses throughout, with some nice uses of multiple versions of the same character in one panel to show movement, as well as some fun use of perspective to show motion and a couple of beautiful left-handed splash pages that hit the reader with moments of real horror. The pacing here is so well-handled you remember that comics can do changes in pace and tempo, the creative team leading you and the characters on a frantic race through panels before coming to a juddering halt at one of these splash pages. It’s a great, simple concept and it really makes a couple of the book’s big action beats pop.

Black Rose: Demon Seed is heavy metal comics. It’s big ideas, and big action thrown at the page with gleeful but focussed enthusiasm and its tremendous fun as a result. If you’re looking for bodysuit-clad punch-ups there’s a little of that here, but not as much as you may be expecting. If you’re looking for high concept, high pace contemporary horror that’s as fun as it is dark? This is for you.