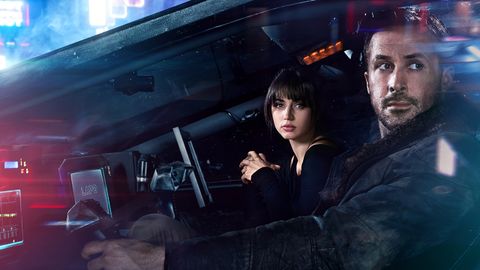 An exquisitely crafted sequel that stands shoulder to shoulder with one of the greatest films ever made. Everyone involved is operating at the height of their powers.

How do you solve a problem like Rick Deckard? Schrodinger’s proverbial protagonist has been stuck in a quantum state – both Replicant and real boy – since Blade Runner’s ambiguous origami-unicorn finale. Any sequel has to address the biggest question in science fiction and, rest assured, 2049 does (sort of). But it’s a testament to director Denis Villeneuve’s spectacular cyberpunk sequel that the nature of Deckard’s identity doesn’t matter – this is a film with much bigger artificial fish to fry.

A world away from the quip-laden superhero smackdowns and ’saber-swinging galactic romps that dominate modern blockbusters, Blade Runner 2049 is a methodically paced, thematically rich neo-noir detective story that eschews sugar-rush action in favour of melancholy musings on isolation, identity, and humanity.

In other words, it’s a Blade Runner sequel through and through. “You’ve never seen a miracle,” Dave Bautista’s Sapper Morton says to Ryan Gosling’s Replicant-retiring blade runner Officer K during an enthralling opening gambit. The real miracle is that Villeneuve and co. have crafted a successor to Ridley Scott’s genre-transcending masterpiece that exceeds even the loftiest expectations.

Remarkably, 2049’s entire premise (revealed in the first five minutes) has somehow been kept completely under wraps, and for good reason. It’s a constantly reconfiguring mystery box of a movie. Seismic secrets are drip-fed throughout the meticulously constructed script – penned by Michael Green (Logan) and returning screenwriter Hampton Fancher.

14 questions I have after watching Blade Runner 2049

The less you know the better, but here are the essentials: 30 years after the events of the first film, K unearths a secret with the potential to “break the world”, putting him on a collision course with Rick Deckard. What follows is an intelligent, twisty enigma that trusts its audience to piece together the clues, the film’s dream logic cohering into a supremely satisfying, emotionally compelling whole.

If Villeneuve was a filmmaker at the top of his game with last year’s Arrival, he proves himself an irrefutable maestro of his craft here – 2049 is the perfect vehicle for the smart, exquisitely shot slow-burners that have defined his career (Incendies, Prisoners, Sicario). He also proves more than a match for Ridley Scott as a world-builder. Perfectly preserving the dirty, retrofitted design of the original, while moving Blade Runner’s vision of an ecologically ravaged North America forward in thrilling ways, it’s a retina-melting big-screen spectacle – VFX, cinematography, costume and production design are all next-level sensational.

Read more: Here's how to make your own Blade Runner origami unicorn

It’s been specially formatted for IMAX – if you can, go see it on the big(ger) screen, because every inch of the colossal frame dazzles. From the smog-diffused skylines of LA’s crepuscular urban sprawl to the breathtaking burnt-orange hues of the irradiated Las Vegas wasteland, it never looks anything less than awe-inspiring.

As for the all-important music, Benjamin Wallfisch and Hans Zimmer’s oppressive, percussive, synth-heavy score is unflinchingly loyal to the spirit of Vangelis, and makes admirable use of pin-drop silence. But, it has to be said, it never comes close to the transcendental heights of the original; atonal rather than thematic, supporting rather than elevating the material.

The same certainly can’t be said for Gosling. Far from a re-heated Rick Deckard, K is a different beast entirely. Gosling delivers a performance of impressive nuance and anguish while proving more than a match for the role’s physical demands. As for Deckard, it’s all but impossible to discuss his involvement without detonating a spoiler nuke.

But if Harrison Ford’s Gap get-up set alarm bells ringing pre-release worry not – there’s some weighty material here that Ford fully commits to, Deckard receiving a poignant payoff after his 30 years in the wilderness. He even gets a cracking chase that flips an iconic sequence from the original on its head. But it’s important to note this is Gosling’s movie, and better for it.

The rest of the cast – including Jared Leto’s Tyrell-esque Niander Wallace, his right-hand woman Luv (Sylvia Hoeks) and Ana de Armas’ Joi – all make robust additions, and harbour their own epochal secrets (naturally). The lack of an antagonist as impactful as Rutger Hauer’s poetic Roy Batty is the only significant shortcoming that can be mentioned without deep diving into a handful of questionable plot specifics. And there’s no getting around the fact it’s a long, largely humourless experience.

Read more: Blade Runner 2049 "might be a masterpiece" - the early reactions are in and they are neon-glowing

Thirty-five years ago, Blade Runner was misunderstood and dismissed in the summer of E.T. It remains to be seen whether mainstream audiences will prove more receptive to this equally esoteric follow-up in 2017. Villeneuve’s film is a direct continuation in every respect; it’s difficult to imagine anyone – even Ridley Scott – making a better Blade Runner sequel. We truly have seen things you people wouldn’t believe...

An exquisitely crafted sequel that stands shoulder to shoulder with one of the greatest films ever made. Everyone involved is operating at the height of their powers.