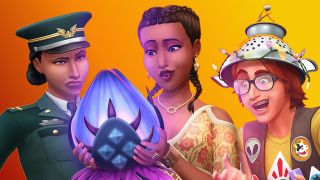 Let's pretend Earth is a gloriously peaceful place where our main concerns are growing fruit and veg, breeding cows and chickens, making cheese and wine, and trying to wed the hot doctor in town by giving him a cup of coffee every goddamn day. No war, no politics, just quiet Sundays spent sea fishing, or down the mines. It might not be the truth, but boy is it idyllic. And maybe they'll be distracted long enough to realise that Earth isn't always a pleasant place to be. Too dark? Sam Loveridge

Is there a more human game than The Sims 4? Not only does it boil our strange species down to its essential needs, but it's also proof that no matter how fancy your house or important your career, we're all just sacks of flesh who will soil themselves if something is blocking the path to the toilet. If our new alien overlords are friendly, it will help teach them what we need to survive, and that we're ultimately harmless. If they're not friendly, there's a chance they'll get so addicted to playing with virtual humans that they'll forget all about the whole enslaving, destroying and anal probing thing. That or they find it so hilarious trapping sims in swimming pools without ladders that they want to try it on real people... Rachel Weber

Let's be honest; no mere mortal human can truly claim to understand the works of Hideo Kojima. The man is, and always has been, operating on another plane of existence to the rest of us. I'm not saying that plane is necessarily higher or better than your average modus operandi. It's just different. In that sense, by showing off Metal Gear Solid to an entirely new (and, most importantly, unbiased) species of intelligent beings, perhaps one of them will finally be able to tell us conclusively whether Kojima is a genius or a madman. Or both. Or neither. Oh who am I kidding? They'll probably just attach a bunch of Fulton balloons to a goat and burst into fits of giggles like the rest of us. Alex Avard

Every Kingdom Hearts game in a random order

I, for one, welcome our new video game-curious overlords.

The first thing I’d show them is the Kingdom Hearts series in any order I please – just to blow their tiny green minds. Sure, you’ve mastered inter-dimensional travel, but do you know what a Nobody is? Oh, you’re fluent in eleventy billion languages? How about naming every Organization XIII member in alphabetical order? Pop quiz: Explain the difference between Xemnas, Ansem, Xehanort, and Young Xehanort. No, you can’t ask your alien computer.

Give them a whiff of 358/2 Days, Dream Drop Distance, and Kingdom Hearts 2.5 HD Remix2 Final Mix Birth by Sleep: ReCoded and they’ll realise that only vastly superior beings could ever come up with a story as convoluted and complex as that. They’ll soon scarper off into their spaceships and back into the far reaches of the infinite cosmos to ponder what they’ve just witnessed. No probing today, thank you.

Failing that: Destroy All Humans. Just to give them some quick pointers. Bradley Russell

If I'm introducing video games to somebody who is totally alien (pun intended) to the concept, I want a game that doesn't have overly complex controls or concepts. With that constraint, I still want something that'll give them a good idea of all the weird and wonderful stuff video games can do: unique challenges, colorful sights, catchy music. Katamari Damacy is the natural choice - all you do is use the two control sticks and a few buttons to roll stuff into a ball while listening to a sublime soundtrack that samples from all manner of international genres. The fact that Katamari will introduce my new alien friends to a wide variety of Earth objects is just a bonus. My only concern would be if they're either offended by, or identify too strongly with, the King of All Cosmos. That could be an issue. Connor Sheridan

Bayonetta is a brilliant action game that everyone should play, but for the love of god please do not try to decipher its story. There are some things the human mind just can't handle. It's an impenetrable combination of time travel, Christian dogma, witch fables, and Platinum Games-brand absurdity. I can only assume director Hideki Kamiya came up with it during some sort of Jimmy Neutron-style brain blast, and that now even he can't parse it. That being said, I reckon we should show it to aliens and see what they make of it. A human mind can't decipher Bayonetta, but maybe an alien mind can. Austin Wood

To try and convey as much maybe-useful information to our visitors in video game form, it has to be Assassin’s Creed. It’ll be a fun way to show them games but also an informative stroll through some key periods of human history to show them our progress. It’ll also do a good job of illustrating our rise in capabilities and achievements in architecture, design, agriculture, technology and so on. Which in turn will provide a solid background (and contrast?) to how our advancements have taken us to the modern day and how we’re seemingly doing our best to ruin the planet. Leaning on the Assassin’s story arc, there would also be scope to portray our feelings about free will and breaking the chains of oppressors, and rebelling against tyrants etc. Maybe the alien visitors will immediately associate themselves with one side of the story - how exciting/terrifying/pleasing. Anyway, the AC games cover key periods of human life on earth and will expose our extra-terrestrial friends to a whole host of important events, key writings, stories and myths, key figures from history - from philosophers and scientists to grand leaders - show some of humankind’s greatest achievements and milestones (the pyramids, the Renaissance etc). Yeah, here I am, the giver of sensible answers. Rob Dwiar

I was tempted to choose the Mass Effect trilogy for this question at first. Yes, I’m aware that showing a game about aliens to actual aliens is very “how do you do, fellow kids”, but extraterrestrials were always set-dressing in Bioware’s series. It’s really about how we respond to outsiders, so visitors from outer space could learn a lot about us from how we see them. The problem is, they’ve come a long way. Like, billions of lightyears. They probably need to chill the hell out after star-trekking across the universe. And you know what? There’s nothing more serene than Animal Crossing. I’m pretty sure Nintendo made this franchise by wringing all the good bits from life and distilling that into a game - it’s joy in digital form. It also demonstrates the best parts of humanity. For starters, its villagers are forever socialising and showering each other with thoughtful gifts. What’s more, we look after our environment by planting trees and lush flora at every opportunity to turn it into an oasis. Then we give rare wildlife a place to flourish while preserving the fossils of our past. It’s a game about conservation and kindness. If you want to show off our nicest qualities, this is the way to do it. Benjamin Abbott