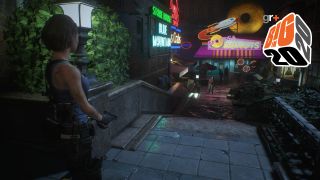 September 28, the day that Racoon City became as close of an approximation to hell on earth as you're ever likely to see. Infected stalk the streets freely, the decaying remnants of a populous drawn to what little remains of the living. Fresh horrors lurk in every street and shadow, but the real terror out there makes no attempt to conceal itself. Every step forward – closer to answers, to an escape – brings you closer to the true tyrant that haunts Racoon City. Nemesis is out there, a looming presence driven by the singular desire to quash what little remains of the S.T.A.R.S. operating force following the incident at Spencer Mansion two months before. We've done this once before and, come April 3, 2020, we will do it all over again in Resident Evil 3 Remake.

The reconstruction of Resident Evil 2 was a success for Capcom. The studio was able to take one of the defining games of 1998 and make it feel relevant again for 2019 – a relic once relegated to the annals of history reanimated to scare the living shit out of old and new audiences alike. Resident Evil 3 Remake, then, presents an interesting opportunity, not only for Capcom to give an oft-forgotten classic of '99 another chance at life, but to give us the opportunity to view Resident Evil's original turn towards action  from a new perspective.

Resident Evil 3: Nemesis always existed in this strange space. Its underlying formula was a sophisticated evolution of the games that preceded it, with its heightened pace and reactive artificial intelligence working to bring a palpable sense of tension to Jill Valentine's (already) miserable staycation in Racoon City. The addition of a 180-degree turn and dedicated dodge button worked to alleviate many of the frustrations that came to define Resident Evil's earliest incarnations, although the otherwise archaic tank controls, fixed-camera, and hardware limitations of the era actively worked against the development team's best intentions. As a result, it never received the praise of its contemporaries, caught between Resident Evil's legacy as a survival horror titan and Capcom's desire to give the series a shot of adrenaline.

"There were things that we wanted to do in the original but couldn't," Resident Evil 3 Remake producer Peter Fabiano tells me. "[But] with the advancements in technology, and by utilizing the RE Engine, we were able to take the original and reimagine it with current graphics and modernized gameplay. That meant we needed to be able to drive our creative vision while keeping true to the source material."

To achieve this, Capcom is tearing the original down to its barest foundations, constructing something anew out of the rubble. Resident Evil 3 Remake can be best described as a rough approximation of what existed before, rather than a total restoration. Designed in such a way that it can still trigger a nostalgia-induced dopamine hit for those of you old enough to remember the warming embrace of the PlayStation startup sound, but fresh enough to still feel like a contemporary, consolidated action-horror hybrid.

This also means that sweeping changes will be coming. Given the natural overlap between Resident Evil 2 and Resident Evil 3's timelines (both are desperate struggles to escape city limits before a thermobaric missile vaporizes everything within them), we can expect to see Leon Kennedy, Claire Redfield, and Jill Valentine's stories interconnect a little more than they may have done in the past. Returning players should also expect to find Carlos Oliveira's role in the game expanded, with further steps taken to strip away the different endings of the original to continue Capcom's efforts to give Resident Evil a more centralised canon.

Ultimately, we can look towards the overwhelming success of Resident Evil 2 Remake as proof that this model can work. By treating the original release as a blueprint, it gives Capcom the space to make sweeping adjustments and improvements. This ranges from obvious changes, such as levels and scenarios being redesigned entirely to better support the tighter third-person camera and more fluid control systems, but it extends to other elements of the game too.

"Photogrammetry and motion capture techniques allowed actors to bring the characters and their expressions more to life," says Fabiano, and it's clear from the trailers that Capcom is taking this as an opportunity to pump some new blood into the previously static cutscenes and quieter story beats. "And let's not forget that we needed to build out Nemesis and make sure he felt just as terrifying as in the original."

Ah, Nemesis. How could we forget about that monster? If you've played Resident Evil 2 Remake you'll no doubt be familiar with Mr. X – The Tyrant – who gleefully stalked the corridors of the Raccoon City Police Department, making Leon and Claire's adventures a living hell. Well, Nemesis is an untethered nightmare by comparison, relentlessly hunting Jill all throughout Raccoon City, a threat that cannot be stopped or contained.

Fabiano tells me that his team has been inspired by Tyrant, but it's working hard to ensure that Nemesis is an enemy that is capable of holding the entire city hostage. "There was some overlap in the development of RE3 and RE2, and both utilise RE Engine. We certainly took some elements that we learned putting together RE2's Tyrant, but Nemesis is his own brand of terror, and a relentless pursuer who can use weapons."

"During development, our director saw what the team did with Tyrant in last year's RE2 and was determined to surpass that with Nemesis," he says, adding, "When considering Nemesis' design and AI, we were impressed by what the RE2 team had done with Tyrant but we wanted to make sure that Nemesis was his own brand of fear. You'll see that when you play the game."