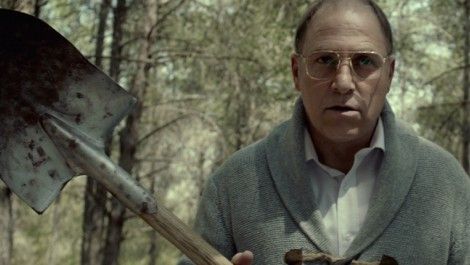 You might not know the names Aharon Keshales and Navot Papushado, but these talented writer-director-editors made history with their stunningly topsy-turvy 2010 debut, Rabies – Israel’s very first horror film. The fact Tarantino has called their follow-up his favourite film of 2013 should nudge it even further up your need-to-see list.

Beginning in swirling slow motion with kiddies playing hide-and-seek, the set-up is quickly and wittily established: faced with a series of unsolved child murders, a crooked cop (Lior Ashkenazi), an abused suspect (Rotem Keinan) and a grieving relative (Tzahi Grad) face off in a basement, seeking vengeance/vindication by any means necessary.

“Maniacs are afraid of maniacs, not guns,” decides Grad, before demonstrating of his own certifiable take on interrogation.

We’ve seen this story many times, but what marks Big Bad Wolves out from the pack is the filmmakers’ extraordinary mastery of tone.

Switching from scenes of stomach-churning torture to belly laughs and back again, the film nimbly assimilates imagery from the Brothers Grimm (notice how often the colour red flashes across the screen), political satire and sudden bursts of horror, depicting a larger-than-life world of rot and ruined innocence.

Rabies featured a serial killer who kept his hands clean throughout the bloodbath, but Big Bad Wolves doesn’t spare a soul. As violence begets violence, our supposed protectors – fathers, teachers, lawmen – are proved to be predators who’d rather rip each other to shreds than save the children lost forever in the woods.

You might not know the names Aharon Keshales and Navot Papushado, but trust us – you will.