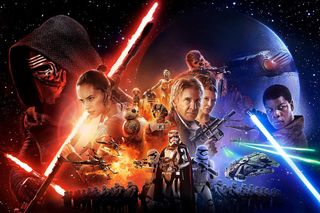 Still, we've given it our best shot. We – the teams at GamesRadar+, Total Film, and SFX – have put our heads together to come up with a definitive ranking of the Star Wars movies. While there was a clear winner, the margins between first and second place, and fourth and fifth place, were the smallest. We also decided against including the Clone Wars animated movie and the Christmas specials. Which, for anyone who has seen a Star Wars Christmas special, will probably come as a relief. Star Wars: The Rise of Skywalker also makes an appearance below, although the placement may change as Episode 9 has time to settle with us.

So, without further ado, these are the best Star Wars movies of all time – ranked!

While not bogged down by trade negotiations, Attack of the Clones marks the weakest instalment in the prequel trilogy. Obi-Wan Kenobi (played by the consistently excellent Ewan McGregor) acting as a detective, trying to discover what's happening on Kamino, is a fun detour through space. Plus, the eventual fight with Jango Fett is jet-pack fuelled fun.

Unfortunately, though, it's the blossoming romance between Anakin and Padme that's an absolute bore. Hayden Christensen turns the future Lord Vader into a mopey, creepy teenager, while Natalie Portman phones in her performance. Then again, we do get that Yoda and Count Dooku fight, which is Episode 2's highlight.

The Phantom Menace gets a whole lot wrong. There's Jake Lloyd's unfortunatley annoying performance as Anakin; there are multiple alien designs that are vaguely racist caricatures; Jar-Jar Binks exists. Yet, there are also some really great elements to Episode 1 that should not be overlooked.

Regardless of your feelings towards the Gungans, Naboo's verdant rainforests, Atlantean underwater cities, and utopian palaces serve as gorgeous backdrops that expand the Star Wars universe. The podracing scene is a fun take on Ben-Hur's timeless chariot race. And the grand finale lightsaber duel is phenomenal. Darth Maul and his double-bladed lightsaber versus Qui-Gon and Obi-Wan is easily one of the greatest fight scenes in the entire series.

As you likely expected upon scrolling down this list, the prequels make up the bottom three. Revenge of the Sith marks the best of the worst. Again, let's get those no-so-good elements out of the way first: General Grievous is wasted, Mace Windu doesn't get the arch anyone wanted, Anakin killing the younglings is laughable, and the dialogue remains questionable.

Yet, Revenge of the Sith is oddly satisfying. McGregor becomes the dashing-yet-weary Obi-Wan we always knew he could be. Another Yoda fight makes for silly fun. The Emperor's speech about cheating death is excellent. We may not rank the prequel trilogy highly here, but there are certainly elements to love throughout all three movies.

The adventures of Han Solo were always going to be ripe ground to tell interesting new Star Wars stories, so when Disney announced a spin-off about the scruffy nerf-herder, few fans were surprised. The worry was: could any actor ever match the swagger of Harrison Ford? Thankfully, there was one man who stepped up to the plate and managed to embody Solo almost perfectly: Alden Ehrenreich.

While perhaps a tepid performance at first, Ehrenreich soon becomes the Solo we all adore, carrying the movie through a raucous, imperfect adventure. We may not have needed an origins story to his name, or have his first meeting with Chewie be in a muddy pit, but the outcome is a Star Wars movie that feels more akin to the original trilogy than any of the prequels (or, indeed, Rogue One). There's also Donald Glover as Lando Calrissian, who embodies the character so well that you would think Glover spent his entire life gearing up for this one role

Rogue One takes the Star Wars universe in a direction it's never been in before. There's not a single proper Jedi, barely any lightsaber action, and only a few recognisable characters. Yet, Rogue One works because it fully commits to being different to the other Star Wars movies on this list.

The Star Wars story is a gritty war movie about never giving up despite the insurmountable odds. Headlined by Felicity Jones, Rogue One succeeds in killing off its main cast while also offering a glimpse of hope at the end. Plus, it leads into A New Hope seamlessly, with a spine-chilling final scene that's almost perfect.

Ending the trilogy of trilogies was always going to be difficult. The task at hand was unenviable. Yet, J.J. Abrams rose to the challenge. And while not everyone was sated by the eventual Episode 9, there were enough breath-taking moments to leave even the staunchest cynics with shivers down their spines.

There is, however, no denying The Rise of Skywalker's plot holes. Palpatine's return goes basically unexplained, and the revelation that Rey's parents were actually somebody has rubbed many people up the wrong way. Yet, the return os some fan favourites, plus the introduction of some new ones (Babu Frik!) keeps the final movie in the Skywalker Saga high up on this list.

The first movie released by Disney, Star Wars: The Force Awakens had a lot riding on it. Could this redeem the series after the prequels were, shall we say, mixed? Thank Yoda, then, that director J.J. Abrams managed to direct a movie that feels fresh yet also like a classic Star Wars movie.

The Force Awakens re-establishes the visual language and boundaries of the Star Wars universe beyond the original trilogy. The good guys didn’t win after the Emperor was defeated. Instead, life just kept going in the galaxy. Our beloved characters are old, ragged, and divorced (or whatever the glaxy far, far away's version is). Hope now lies in a bunch of new faces: the scrapper Rey, the rebel Stormtrooper Finn, and the slick flyer Poe. This is masterful storytelling that retreads ground, but also introduces enough new characters to launch an exceedingly excellent sequel trilogy.

The Last Jedi may be one of the more divisive Star Wars movies, but only for good reasons. Where The Force Awakens remixed an already beloved formula, Rian Johnson's movie launched everything out the window. Rey's parents are suddenly nobodies. Luke's a miserable old man who now has a weird sense of humour. Snoke's really not that import. These may seem odd choices compared to what's come before, but they are exhilarating revelations. And while The Rise of Skywalker did a bit to undo some of this, there's no denying The Last Jedi stands as its own, wonderful instalment in the Skywalker saga.

Then there's the cinematography. The Last Jedi is the most beautiful Star Wars movies, hands down. That throne room scene, with its bracing reds, is phenomenal. And Ach-To, the island where Luke lives, makes for a stunning training ground. Yes, it's controversial, but in time this will be a beloved Star Wars movie.

Return of the Jedi does a rare thing for a trilogy closer: it picks up all the pieces left behind and offers a satisfying conclusion to everything that came before. There's a lot that happens: peace is brought to the galaxy (for now), the Emperor is defeated (for now), Han and Leia get together (for now), and there's a huge battle over Endor that's still mindblowing today.

The way the film jumps between the fight between father and son, to the ground war of Stormtroopers against the Ewoks, to the space dogfights led by Ackbar and Lando, all without feeling confusing – that's masterful editing. And admit it, you loved the Ewoks and their yub-nub song. We all do.

Where it all began. A New Hope introduced us to that famous galaxy far, far away, filled with lovable creatures, witty characters, and a timeless tale of good verses evil. Originally titled Star Wars, this movie inspired a generation of fans and filmmakers alike. While the effects blew everyone away (and still hold up reasonably well), it was the cohesiveness of the world that really impress.

Whereas most sci-fi of the time was more magical, A New Hope featured a dirty, lived-in universe, which somehow feels so real. Lucas then weaved what's basically a classic Disney princess story where a lowly villager (Luke) discovers a higher calling and battles the evil space witch (Vader) to save the day. An adventure worth reliving time and time again.

It's tough competing with A New Hope, but Empire Strikes Back just about edges the original Star Wars. Controversial upon release, Episode 5 has everything we love about the series: a burning romance, a familial twist, and, most importantly, hope. Yes, despite the darkness of Empire – which features torture, betrayal, disturbing visions, and Luke losing a hand – there's never a feeling that all is lost. Our heroes are good, they fight for justice, and they will never give up.

Empire also includes more iconic scenes than almost any other movie. There's Luke and Vader's battle, Leia telling Han she loves him, Luke training with Yoda, and Luke dangling from an antenna at the bottom of Bespin. This movie changed cinema, and there's no overstating it's importance to so, so many fans.