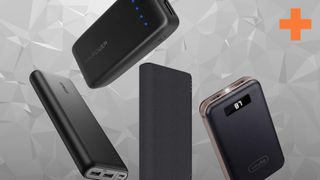 Having one of the best portable chargers can be a massive lifeline in the modern world. We’ve all been in a precarious position while out where our phone or laptop is moments away from dying and panic sets in. You’ve also likely to have had a tablet or video game console controller give up on you while at home and been in no easy place to plug in your wired cable. So, naturally, a quick fix to continue that vital game of Call of Duty, or not lose that half-written tweet on your iPad is needed.

The great thing about power banks and portable chargers is that they’re not just for emergency phone battery: they can be life savers every day around the house and beyond. From phones to headphones, to MacBooks; as long as you’ve got a reliable one then running out of battery is no longer a problem. There are many factors when picking the right one: reliability, weight, size. So, here’s our pick of the best available on the market. And if you want to get more specific, here are the best Nintendo Switch chargers on the market.

Anker is a popular choice and for good reason. The Powercore 20100 is sleek, reliable, and handy on the go. It’s a useful piece of kit even though it’s heavy (as Anker tends to be). That said, the double charger ports come in handy, it’s not overly big (around the same size as a smartphone but at least twice as thick), and certainly does the job; quickly charging more than one appliance at a time. Despite its size, the 20100 is discreet, with a smooth, dark aesthetic it does the job without drawing attention to itself.

The iMuto is a more affordable option for those on a tighter budget. At just under £23 you’d be forgiven for thinking it won’t last, but in fact the power it supplies is surprisingly long-lasting. This modest piece of equipment will charge a smartphone four or five times over without running out of battery, and can also serve as a worthy boost for some laptops and MacBooks. It may be chunky and rather heavy but the iMuto is value for money and does a sterling job. Comes in either black or white.

Another Anker in the list, mainly because they’re so reliable, the 26800 model has three 6A outputs for multiple charging and has the juice to handle it all. Yes, it’s big and weighty but the premium matte finish is in keeping with the brand’s stylish and subtle appearance, with an LED power wheel to let you know how much juice is left, it may be expensive for a charger but it’s worth it. Incredibly, there’s a week’s storage of power at full charge: that’s the equivalent of almost 10 iPhone 6s charges, five-and-a-half for a Galaxy S7, or two full iPad Air 2 battery refills.

Looking for a portable charger that’s relatively tiny and inexpensive? The RAVPower range ticks those boxes but serves well as an on-the-go mobile phone charger and will juice up your iPhone once or twice, as well as iPads and other tablets a few times over, meaning it’s handy to whip out for a quick battery surge when you need. It won’t, however, be powering up your laptop but for under 15 quid it’s the capacity you’d expect, yet its subtle credit card size, choice of colours, and lightweight nature makes it a bargain option.

The cheapest charger pack on the list at under a tenner, the Bonai portable charger is hard to complain about - even if it doesn’t look particularly attractive and is bulky. Surprisingly though, it’s got a heck of a lot of power to charge your phone, with dual sockets and the ability to fully juice either your phone or tablet more than once (three times in the case of an iPhone 7), this bargain is beyond impressive. Plus, a built-in flashlight makes it even more practical when fumbling in the dark or simply in bed without a nearby charging plug.

Despite being called an XXL powerstation, the mophie, is arguably one of the best portable chargers in the 2019 market. With a steeper price than the Bonai of RAVPower it also means it’s a noticeable step in in terms of quality. Its 30W of charging power says there’s no problem sorting out a depleted laptop battery, and can give a MacBook an extra 14 hours of charge. And while it’s a tad bigger than others it’s still only the size of a mobile phone. There’s a nice fabric finish to it that removes any cheap, plastic feel other cheaper ones have, and fits into your workstation with little fuss.

To call this a robust charger is something of an understatement. The LifeActiv 10 is the charger you want when outdoors because it’s designed to withstand anything: according to its manufacturers it’s waterproof, snow and dirt resistant, and can survive being dropped more than once. In case you were planning on taking it camping there’s an LED flashlight built-in, 10,000mAh of power, plenty of charging life, and the reassuring durability of a literal brick. What’s more, it’s impressive capabilities come in a fairly compact power bank pack, so it’s convenient to pop in a bag’s side pocket until needed.