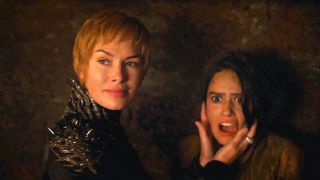 If nothing else, Game of Thrones season 7 always keeps you on your toes – and the actors are included in that. For one trio, their first day filming the most recent Thrones season was almost certainly their hardest. It even involved one of them having to be sawn out of chains after becoming trapped.

The scene in question – look away now if you haven’t seen Game of Thrones season 7 – involves Cersei checking on a chained-up Ellaria alongside her Sand Snake daughter, Tyene and eventually kissing Tyene using the same brutal poison method that Ellaria used to murder Myrcella. Not only was it emotionally-charged but was also the very first scene any of them filmed for the most recent season. Baptism of fire, much?

HBO have released a snippet of a behind-the-scenes clip (which can be seen in full should you have access to HBO Go) of the scene and, ooh boy, it sounded intense.

For one thing, as Indira Varma mentions, she had to put herself in a “difficult emotional place” for Game of Thrones season 7, episode 3 and then literally get chained up. Again: this is day one. I’ll bet they didn’t teach that in acting school.

Lena Headey, though, definitely understood Cersei’s actions and still perversely revels in filming the scene, “Obviously, she wanted revenge for Myrcella and what way is more painful than watching your daughter die, unable to touch her, as [Cersei] wasn’t.”

Director Mark Mylod also weighed in on what he felt was the “satisfaction of revenge” coming across in the scene. It certainly was a point where we almost (but not quite) felt empathy for Cersei, having lost all of her children in various tragic circumstances.

One person you do have to feel sorry for is Indira Varma. Having finished shooting, she ended up needing a little extra help to escape her chained predicament, “At the end of the day,” Varma explains, “I was like, ‘mate, I can’t get it off, can someone help me?’ And Pete from Props is like ‘I think we need a saw’ and I had to be sawn out.”

So, lesson learned: always keep a saw nearby. You never know when it might come in handy.