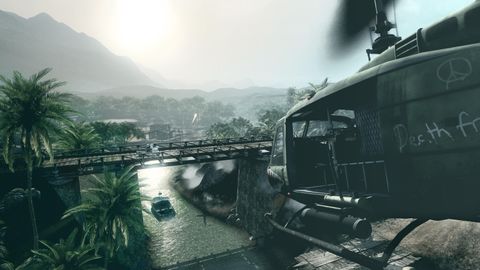 The result is a singleplayer campaign that at its best really challenges you to use your intellect as well as your trigger finger. It’s a system that works best in urban environments - later forays into South America quickly descend into the linear and restrictive territory of less inventive shooters. It also becomes clear that despite being part of a team you’re the only member of the squad using his brain. Your teammates are efficient but by-the-book, and often you’ll have to tow the line in order to trigger events and coax baddies to appear.

In short: Bad Company 2’s singleplayer mode struggles to maintain a balance between scripted events and a sense of freedom. The result is an inconsistent campaign that mixes moments of brilliance with long stretches of the merely competent.