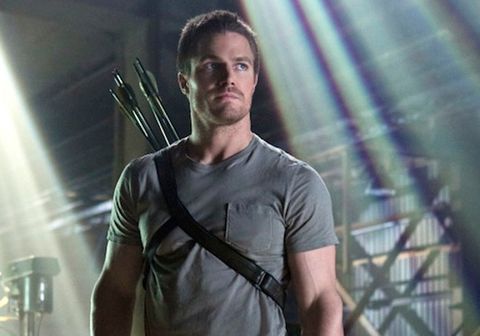 THE ONE WHERE : Surviving five years as a castaway on a remote island in the North China Seas, playboy Oliver Queen returns to Starling City, determined to bring justice to its corruptors…

THE VERDICT : The DC bowman returns to the small screen with a bruisingly different take to his popular Smallville incarnation. In its favour, this pilot episode deals us the emerald archer’s origin tale in lean, compact fashion: the direct, hand-held opening shots place us instantly on the island, just at the end of Oliver’s exile, and some brief news footage of his return to Starling City fills in the rest, rolling headlines style. It’s almost a throwaway approach to what’s usually the pivotal part of any superhero story, but then stranded-on-a-desert-island-and-taught-myself-archery isn’t quite in the same mythic league as rocketed-here-from-the-planet-Krypton. As Oliver, Stephen Amell certainly looks as though he’s stepped from a comic book (though he bears precious little resemblance to the classic Green Arrow in its pages), but for all his Calvin Klein ad looks his take on the party animal turned urban avenger is troublingly flat. Given that he clearly has no compunction killing people to protect his identity he’s perilously close to a bland psychopath in the American Psycho mould – more Bateman than Batman. The show’s desaturated aesthetic and parkour-influenced action scenes have a touch of the Bournes about them, but the trick archery itself is nowhere near as spectacular as this character demands. At one point the director lets our imaginative muscles do the heavy lifting, relying on the sound of the flying arrows alone – it’s either an inspired touch or a bit of a cheat.

DID YOU SPOT? : There are shout-outs to two comic book creatives hidden in the dialogue: Mike Grell and Andy Diggle

TRIVIA : Oliver nicknames his sister Speedy, a nod to Green Arrow’s kid sidekicks in the comic books. She clearly shares a drug problem with the first Speedy, whose battle with narcotics formed a classic ‘70s storyline.

BEST LINES :
Tommy: “I highly recommend Carmen Golden.”
Oliver: “Which one’s she?”
Tommy: “The one who looks like the chick from Twilight .”
Oliver: “What’s Twilight ?”
Tommy: “You’re better off not knowing.”

Read all our Arrow reviews .

Arrow begins airing in the UK on Sky1 on 22 October.