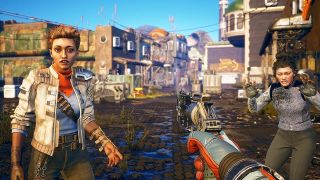 The Outer Worlds, developer Obsidian's spiritual successor to Fallout: New Vegas, is easily one of the most exciting new games of 2019 on the way, promising to offer the kind of unparalleled RPG/immersive sim freedom that we haven't seen since, well, Fallout 4.

Case in point, speaking at a recent preview event with Polygon, Obsidian's Senior Designer Brian Heins confirmed the news we'd all been secretly hoping for; you can kill every single NPC in The Outer Worlds, including those critical to the main story.

"It is insanely hard" says Heins, explaining how Obsidian have managed to cater to these violent delights while still making the game playable; "Any NPC that is critical to a quest or some information, we have to have backups for the player."

The Outer Worlds, Borderlands 3, and the unexpected resurgence of the video game space western

"Anyone you see, you can kill, [so] there’s got to be a way to get whatever they were going to give you, whether it’s a terminal entry or you can loot something off of their body or there’s a chest in their office that you would now lock-pick to get the information from. We gotta start figuring out all of those."

Only a rare few games have offered the same kind of murderous freedom, with Skyrim famously preventing players from being able to kill children and critical NPCs. We'll find out how The Outer Worlds stacks up against its RPG brethren soon but, if Heins' comments are anything to go by, it sounds like Obsidian isn't cutting any corners.

The Outer Worlds touches down on PC, PS4, Xbox One on October 25 this year, and on Nintendo Switch sometime at a later date, but be sure to stay tuned to GamesRadar+ for all the coverage on Obsidian's latest space western power fantasy.

For more, check out our recent preview of The Outer Worlds, or watch over ten minutes of gameplay footage below, complete with us killing several NPCs... for research.