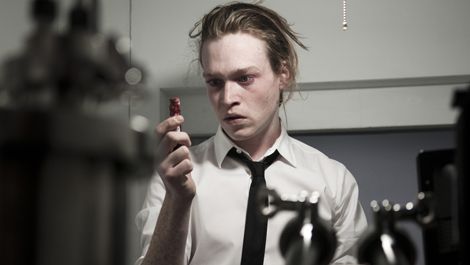 Set in a world so addicted to celebrity culture that even their diseases are collector's items, it introduces virus salesman Sid March, played with queasy intensity by rising star Caleb Landry Jones ( X-Men: First Class ).

Working for the Lucas Clinic (recalling many a DC institution), March wears the same clothes every day (like The Fly 's Seth Brundle) and peddles the cold sores of starlets such as Hannah Geist (a Cronenberg name if ever there was one, played by Cosmopolis 's Sarah Gadon).

He also gets high off his own supply, leading him into the shady outreaches of corporate espionage (see Videodrome ).

Like his father, Brandon has a brilliance for simultaneously making a complex idea easy to grasp, and taking it to the nth degree.

As TV news reports spew out celebrity "upskirt" shots and a Greek chorus of March's colleagues ponder Geist's vaginal deformities ( Dead Ringers ), it's a future both ridiculous and frighteningly conceivable.

If anything, Cronenberg Jr has a more controlled aesthetic than his dad did as a young filmmaker, matching Karim Hussein's surgical cinematography with EC Woodley's discordant score, and setting pivotal scenes in blinding white labs spattered with red-black blood.

Although the second act loses steam, with Malcolm McDowell serving up some English ham (like Oliver Reed in The Brood and Patrick McGoohan in Scanners ), the ending fulfils all the awful promises of the premise, suggesting a passing the torch, rather than empty pastiche.